With about one month left before they leave, now is the time to go out and see the curious seals that are hauled out on the shore with the guidance of an experienced seal walk ... 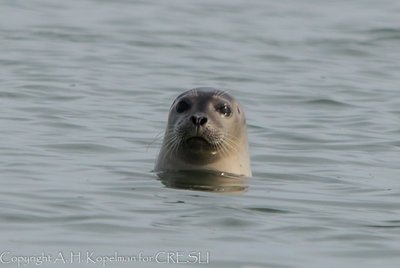 Though Long Island is home to a diverse array of wildlife, many residents do not know that seals have been in the waters around the Island for the past few months, or that they will be leaving by late April and early May as part of their migration. Seals prefer to congregate in certain spots on Long Island, preferably near inlets, such as near Cupsogue Beach County Park at the end of Dune Road in Westhampton.  This act of congregating, known as “hauling-out,” is when seal watchers can have the best view of the large marine mammals as they bathe in the sun, rest, and socialize with other seals. Though seals may look cute, playful, or friendly, they are powerful animals that require space and should not be disturbed by loud sounds or other interactions.  We spoke with Dr. Arthur Kopeman, president of the Coastal Research and Education Society of Long Island, Inc., and he offered these tips for sneaking a peek at these curious mammals before they leave our area:

Sign Up for a Seal Walk with an Expert
CRESLI offers guided walks led by naturalists with years of experience, and can give information as well as practical advice for the safety of both seals and seal watchers.  “Due to the potential for serious disturbance to the seals from people who are not knowledgeable about how to observe seals without disturbing them, I strongly recommend that one attend a guided trip,” said Dr. Kopelman, a veteran seal walk guide.  CRESLI offers seal walks at multiple convenient times on Saturdays and Sundays, and seal watchers can make reservations for seal walks at the CRESLI website here.

Know the Federal Seal Watching Guidelines
To view seals in a manner that is both enjoyable and safe for you as well as the seals, follow these tips:

Where do Seals Prefer to Haul-Out on Long Island?
Though Dr. Kopelman told us that researchers are still unsure what determines where seals will be, they do know that the “prime haul-out areas tend to be calm areas in bays and coves near inlets,” so that seals have easy access to oceans for feeding.  Most haul-out sites are far away from human activities so that seals are not disturbed, so to view seals, seal watchers can expect to take a bit of a hike before reaching an area that is out of the way to see seals at rest. Many of the seals that can be seen have been in the waters around Long Island since September and stay through May, before returning to the Gulf of Maine, the Sub-Arctic, and the High Arctic for the Summer.

Do not worry if you miss the seals – they will be back in the fall, and CRESLI will be hosting additional marine life programming until then.  Their offshore whale watch season will begin in late April with a 46 hour trip to Hydrographers Canyon that will take explorers 140 miles from Montauk to the edge of the Continental Shelf to find sperm whales, as well as other whales and marine creatures. Local whale watch trips from Montauk will begin June 29, which last six hours and are only scheduled for Sundays.  Viewers on these local trips have been able to see fin hales, humpback whales, minke whales, common dolphins, a variety of sea turtle species, and thousands of pelagic birds.