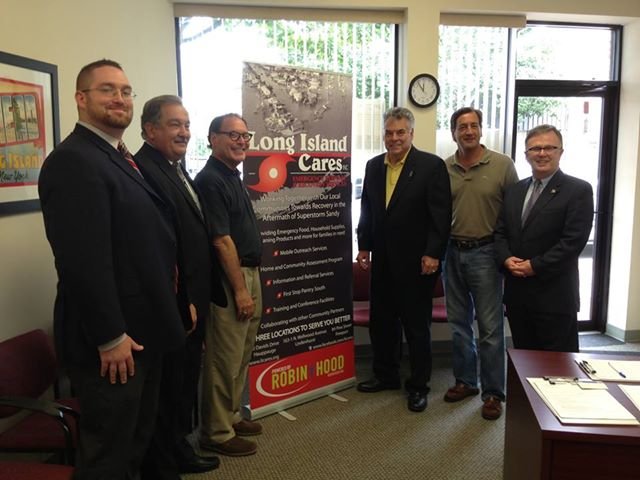 Lindenhurst, NY – August 20, 2013 – Long Island Congressman Peter T. King took time out of his busy schedule to visit Long Island Cares' South Shore Service Center in Lindenhurst on Thursday, August 8, 2013. The congressman who has been a recognized leader in the area of homeland security toured Long Island Cares' newest storefront location to learn firsthand about the work that Long Island Cares continues to do in responding to recovery efforts in the aftermath of Hurricane Sandy.

Congressman King, who is considering a run for President of the United States in 2016 toured the 1,550 square foot storefront on North Wellwood Avenue to discuss progress being made in Lindenhurst following the devastation of Hurricane Sandy.  He met with Long Island Cares' staff and volunteers in the organization's emergency food and disaster supplies pantry and engaged in a conversation about the significant role that both the USDA Emergency Food Assistance Program and Feeding America played in assisting Long Island Cares in responding to Hurricane Sandy. Congressman King also learned about how funding was secured to develop the new Lindenhurst facility through the Robin Hood Foundation and NBTY Helping Hands, and he expressed his willingness to return to Long Island Cares in the future. Mayor Brennan, Senator Fuschillo and Legislator Horsely all shared their experiences and involvement in working with Long Island Cares during intial relief efforts and as part of their long-range recovery plans for Lindenhurst.

"It's not everyday that we have the opportunity to discuss our work with a Congressman and potential future President, Mayor, Legislator and State Senator at the same time," said Pachter. "We were very grateful for the visit and for the opportunity to share our experiences in response to Hurricane Sandy with everyone, and I think we have a wonderful working relationship with our legislators that can only benefit the communities still struggling to recover."

Long Island Cares, Inc. - The Harry Chapin Food Bank is Long Island's first food bank: serving the hungry on Long Island since, 1980.  Long Island Cares brings together all available resources for the benefit of the hungry on Long Island and provides emergency food where and when it is needed, and sponsors a wide variety of innovate direct service programs that help families achieve self-sufficiency. The organization was founded by the late singer, Grammy Award winning songwriter and social activist Harry Chapin in response to the growing issue of hunger on Long Island. It is continued today by his wife and partner Sandy Chapin, a dedicated Board of Directors and talented staff working out of their 35,000 square foot facility in Hauppauge and their storefront hunger assistance centers in Freeport and Lindenhurst. Long Island Cares is a member agency of the Food Bank Association of New York State and Feeding America. Long Island Cares, Inc. is recognized by the NYS Department of Health and the USDA as the regional food bank for Long Island.