Rep. Zeldin Meets with President Trump at White House on the Efforts to Combat MS-13

Zeldin: "The rise of gang violence is one of the greatest challenges we face as a nation." 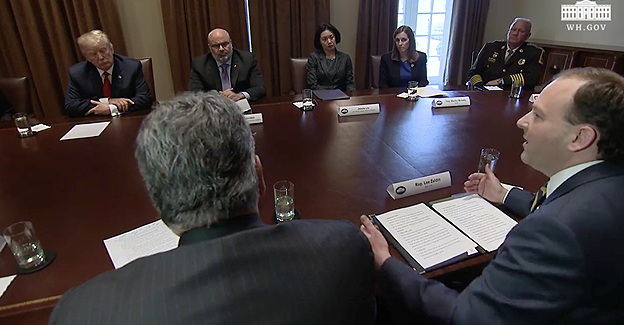 Long Island, NY - February 7, 2018 - Congressman Lee Zeldin (R, NY-1) issued the following statement after meeting with President Donald Trump, Secretary of Homeland Security Kirstjen Nielsen, four other Members of Congress, and law enforcement officials at the White House, with regards to efforts to combat MS-13:
“The rise of gang violence is one of the greatest challenges we face as a nation, but for Long Islanders it is especially personal. From the vicious machete attack of four young men in Central Islip, to the childhood best friends brutally murdered by MS-13 in Brentwood, our community has witnessed the indiscriminate brutality of MS-13 firsthand. Every level of government has a role to play in combating the rise of MS-13, and we must crackdown on the aspects of our nation’s broken immigration system and other policies that have allowed MS-13 and other gangs to take hold in our communities and stay there. I look forward to continuing to work with President Trump and his administration to ensure law enforcement officials on Long Island and around America are successful in their selfless efforts to protect our communities.”