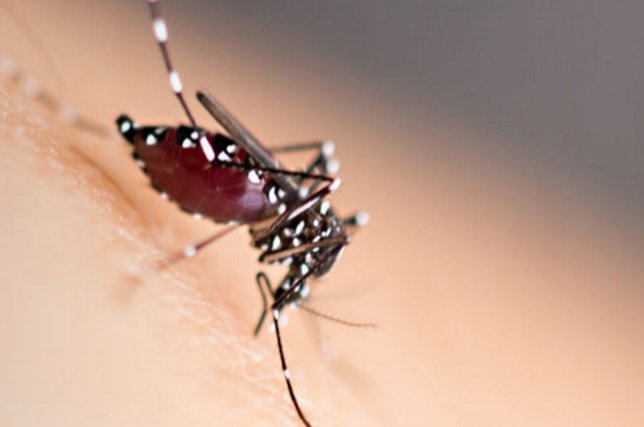 A mosquito landed on a person.

New York, NY - March 17, 2016 - Governor Andrew M. Cuomo today announced a comprehensive six-step action plan to combat potential transmission of the Zika Virus in communities across New York State. The Governor's plan targets the virus at its source – Aedes mosquitoes – with enhanced trapping and testing throughout the entire downstate region. Key components of the plan include distributing larvicide tablets to residents in the potentially Zika affected area, providing Zika protection kits to pregnant women, launching a statewide public awareness campaign, and assembling a rapid response team in the event of confirmed infection by an Aedes mosquito.
The type of Aedes mosquito that is active in New York is not yet confirmed to be able to transmit the Zika virus, but the possibility remains. The Governor's action plan proactively limits the potential for an outbreak if the Aedes mosquito begins transmitting Zika. Mosquito season is set to begin in April.
“The state is taking aggressive action to reduce the risk of Zika transmission in New York,” Governor Cuomo said. “We have put in place a first-in-the-nation action plan that will work to eliminate Zika at its source, reduce potential transmissions and safeguard expectant mothers against this dangerous disease. The state is monitoring the situation closely, and continues to work with all partners to protect the public health.” 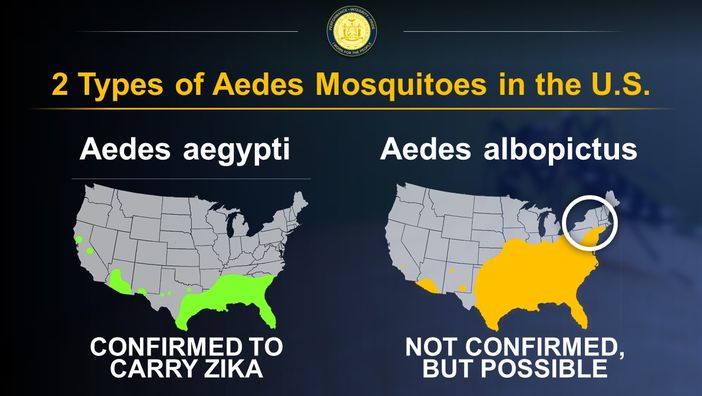 Graphic by New York State Zika Action Plan
The Governor announced the plan earlier today at a press conference in New York City. More information on the Six-Point NYS Zika Action Plan is available here.
Commissioner of Health Dr. Howard Zucker said: “Until we learn more, the best way to prevent microcephaly is to keep pregnant women from being exposed to Zika by not traveling to affected regions, using personal mosquito protection, and doing environmental mosquito control. Pregnant women should also use condoms or practice abstinence during pregnancy if their partner is at risk for Zika.”
Zika is a mosquito-borne virus transmitted primarily by the Aedes aegypti mosquito in South and Central America. The virus may also be sexually transmitted. Although Aedes aegypti mosquitoes are not present in New York, a related species named Aedes albopictus is active in the downstate region. Scientists have not yet determined if Aedes albopictus – the type in New York – transmits Zika. There are 70 different species of mosquitoes in New York State; Aedes mosquitoes make up just three to five percent and may transmit Zika. Mosquito season in New York runs from April through September.
The greatest danger facing those who contract Zika is a birth defect known as microcephaly. This disease occurs in babies of mothers who are infected with the Zika Virus while pregnant. Zika may also cause a rare disorder called Guillain Barré Syndrome, which can cause temporary paralysis. The World Health Organization declared Zika a public health emergency of international concern in February.
The Governor's action plan is designed to specifically target the type of Aedes mosquito active in New York, which has a lifespan of approximately 3 weeks; stays within 200 yards of its birthplace; breeds in small containers of clean water; and exhibits unique habits that help the Aedes mosquito avoid traditional mosquito traps.
Six-Step New York State Zika Action Plan 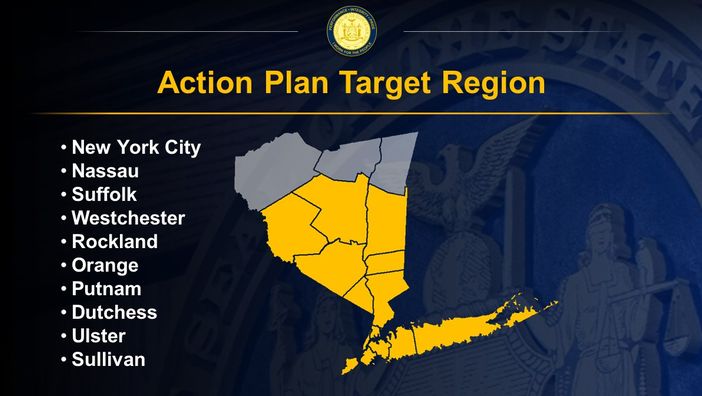 A map of the plan's target region from NYS Zika Action Plan.
1. Eliminate Zika at its Source
To eliminate mosquito breeding sites, the state will distribute 100,000 larvicide tablets throughout the target region. Local municipalities, residents and business owners will be challenged to host clean-up days that effectively eliminate standing water. Residents can request tablets by calling 1-888-364-4723. One larvicide tablet lasts two to three months.
Aedes mosquitoes breed in containers with clean water. New Yorkers are encouraged to do their part by distributing larvicide tablets in permanent places of standing water, such as flower pots, and removing sources of standing water of all sizes, such as old tires, children's toys, plastic containers and even clogged gutters – especially after it rains.
2. Aggressively Monitor the Aedes Mosquito with Special Trapping and Testing
The state will aggressively monitor the mosquito population by deploying special mosquito traps to collect and test mosquitoes across the region to identify and respond to potential Zika transmission. The state will deploy traps in 1,000 locations per month.
Wadsworth Laboratory – already a national leader in Zika testing – will expand its testing capacity to accommodate the additional trapping. The State Department of Health will test 60,000 Aedes mosquitoes per month at Wadsworth in Albany. 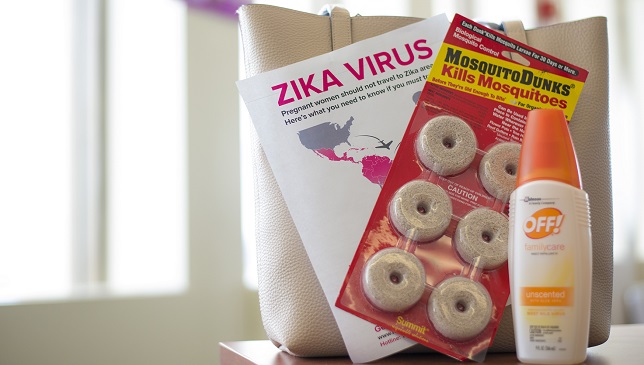 A Zika prevention kit.
3. Provide Free Zika Protection Kits to Pregnant Women
The state will distribute free Zika protection kits to pregnant women in the target region. The Zika protection kits contain educational materials, insect repellent, condoms and larvicide tablets to treat standing water. A total 20,000 kits will initially be distributed to healthcare providers throughout the region. A photo of a Zika protection kit is available here.
The Zika protection kits complement the state's offering of free Zika testing to all pregnant women who recently traveled to a country with active Zika transmission or have had unprotected sex with a partner who recently traveled to or resides in a country with active Zika transmission. Men who recently traveled or reside in an area with active Zika transmission and have a pregnant partner should use condoms consistently and correctly or abstain from sex throughout the pregnancy.
The State Department of Health continues to offer webinars for health care providers on the Zika virus and the care of pregnant women with possible exposure to Zika. Based on current information, infection with Zika at any point in the pregnancy could place the developing fetus at risk. The effect of Zika exposure at different stages of pregnancy on birth defects is not known.
4. Deploy Rapid Response Teams Wherever Local Transmission is Confirmed
The state will deploy rapid response teams wherever a case of Zika transmission by an Aedes mosquito is confirmed. The rapid response team will be composed of officials from the State Department of Health, Department of Environmental Conservation, and the Department of Homeland Security and Emergency Services Office of Emergency Management to inspect surrounding areas, perform additional treatment and develop a local action plan.
5. Issue Emergency Regulations Requiring Local Zika Control Plans Upon Zika Confirmation
The Commissioner of DOH will issue emergency regulations requiring all local health departments to submit Zika action plans with updated protocols for trapping, testing and control.
6. Launch Aggressive Public Awareness Campaign
A major public awareness campaign will be targeted to New Yorkers across the state, as well as international travelers from Zika-affected areas.
The public awareness campaign includes:
To ensure travelers take the necessary precautions to protect themselves against Zika, the state will work with airports in the target region and across New York State to disseminate print materials and broadcast public service announcements to passengers.
Protect Yourself From Mosquito Bites
Mosquito bites have the potential to transmit diseases, such as West Nile Virus.
When going outside, you should protect yourself and your family from mosquito bites by covering up with sleeves and shirts and by using an EPA-registered mosquito repellent.
If you have traveled to a country where Zika is being transmitted and begin to experience symptoms, you should consult your healthcare provider to obtain testing for the Zika virus.