New Yorkers encouraged to download the STOP-DWI ‘Have a Plan’ mobile app in advance of the holiday weekend. 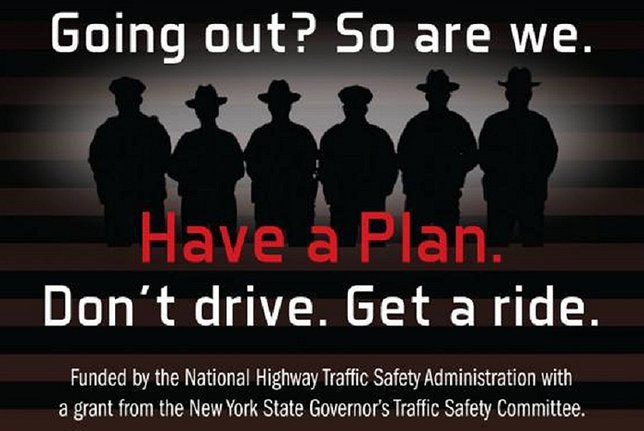 Mobile app allows drivers to seek safe alternatives to drinking and driving during the holidays.

The application, created in partnership with the GTSC, provides users with important information related to alternative modes of transportation to avoid impaired driving. In addition, the application allows users to build their own designated-driver list to ensure they get to and from their destinations safely and offers educational opportunities on the importance of Blood Alcohol Content levels. The app provides access to area attractions and mapping software to help users better plan their evenings. Anyone on an Apple, Droid, and Windows smart phones can download and use the app free of charge.
Acting GTSC Chair and DMV Executive Deputy Commissioner Terri Egan said, "The STOP-DWI ‘Have a Plan’ app is a great resource for New York motorists to utilize during the upcoming holiday weekend. We encourage everyone going out, especially on New Year’s Eve, to have a plan, download this mobile app, and ensure everyone’s safety on New York’s roadways.”
Earlier this month, Governor Cuomo announced New York State’s participation in the national “Drive Sober or get pulled Over” enforcement campaign to crackdown on impaired driving this holiday season. Drivers can expect sobriety checkpoints and an increased number of Troopers and local law enforcement officers patrolling New York roadways. State and local law enforcement are enforcing the national campaign Friday, December 16, 2016 through Sunday, January 1, 2017.
During last year’s crackdown, State Police issued more than 32,000 tickets, including more than 11,000 for speeding, 810 for distracted driving and 348 for the “Move Over Law.” There were also 477 people arrested for DWI and six people killed in crashes.
In addition, 33 counties and 115 local law enforcement agencies participated in the Holiday Season Crackdown last year, resulting in 134 DWI/DWAI arrests, 11 DWAI-Drug only arrests, 99 other arrests and 1,570 vehicle and traffic summonses.
NYS STOP-DWI Foundation Chairperson Chris Marion said, ““STOP-DWI New York urges everyone to make advance plans to get a sober ride home from a friend, a taxi or by using public transportation. The ‘Have a Plan’ app can provide guidance to make the right choice to get home safely. Don’t put yourself or others in harm’s way by driving while impaired. Please visit your phone’s app store and search ‘Have a Plan’ to download the app today.”
State Police Superintendent George P. Beach II said, ““A common threat on our roads, especially this time of year, is impaired driving. The goal of both the ‘Have a Plan’ app and the ‘Drive Sober or get pulled Over’ enforcement campaign is to stop impaired drivers from putting their keys in the ignition. With resources to help motorists make better decisions and increased education and enforcement, we can prevent the needless tragedies caused by drunk and impaired drivers. There is no excuse for getting behind the wheel impaired. Together, we can keep New York State's roads among the safest in the nation.”
In addition to the ‘Have a Plan’ app, The New York State Police, GTSC and NHTSA recommend these simple tips to prevent drunk driving:
New York State Office of Alcoholism and Substance Abuse Services Arlene González Sánchez said, "Binge drinking or use of other substances can be very dangerous and can also be a sign of a more serious substance use disorder. I encourage New Yorkers to use the "Have a Plan" app so they are sure to be safe when ringing in the New Year, and I also want those who may need help for addiction to alcohol or substances to know they are not alone; there is help available by calling, or texting, the NYS HOPELine or by visiting the NYS OASAS website."
For more information about DMV, visit dmv.ny.gov, or follow the DMV conversation online at Facebook and Twitter.