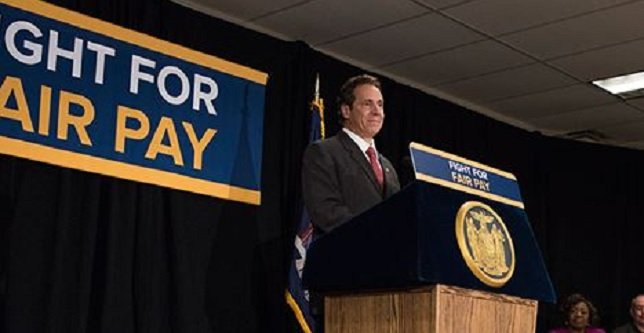 Governor continues push to make New York the first state in the nation to adopt a $15 per hour minimum wage.

Albany, NY - December 18, 2015 - Governor Cuomo today that the minimum wage increase for State Workers will take effect beginning December 31, 2015. The Division of the Budget has just released a Budget Bulletin to State agencies providing information to implement the increase directed by Governor Cuomo, and setting the same phased-in schedule as was recently approved for fast food workers by the Fast Food Wage Board.

“A full day’s work should result in an honest and livable wage,” said Governor Cuomo. “By raising the minimum wage for state workers, we are leading by example and ensuring that thousands of workers are better able to provide for their families. I am proud to be fighting for fair pay in New York, and we will not stop until all workers are paid the decent wages they deserve.”

To date, no other state has enacted a $15 public sector minimum wage. This groundbreaking action comes as the Governor is pushing to make New York the first state in the nation to implement a $15 minimum wage across all industries, and follows the $15 minimum wage increase for fast food workers approved by the Governor’s administration earlier this year.

This increase will be implemented on the same phased-in schedule currently underway for fast food workers, with the initial increase occurring with the first pay period beginning on or after December 31, 2015. In that pay period, all State workers will receive an hourly wage that is no less than:

The wage increase, when fully phased-in, has an annual projected cost of roughly $20.6 million, including the anticipated effect of fringe benefits. Immediate costs will be absorbed within agency budgets.

The full schedule of increases for State workers, consistent with the phase-in schedule currently underway for fast food workers, is as follows:

Governor Cuomo has consistently fought to increase the minimum wage in New York State. In 2013, the Governor signed legislation that raised the minimum wage from $7.25 to its current level of $8.75. That legislation included another incremental increase to $9.00 that will take effect by the end of 2015. Additionally, the State Department of Labor empaneled a wage board last July focusing on tipped workers. The Governor’s administration ultimately accepted that wage board’s recommendations, setting the stage for an increase in wages for tipped workers from $4.90, $5.00 and $5.65 to $7.50 per hour on December 31, 2015.

Most recently, the Governor directed the Department of Labor to empanel a wage board to investigate and make recommendations on an increase in the minimum wage in the fast food industry. Earlier this year, then-Acting State Labor Commissioner Mario J. Musolino accepted those recommendations and signed the official order setting in motion the phased increase toward $15 per hour described above. An estimated 200,000 fast food workers are expected to benefit from this increase.

In total, more than 2.3 million New Yorkers (roughly 1,435,500 workers living outside of New York City and 927,400 living within New York City) will be directly benefitted by the Governor’s proposal to increase the minimum wage for workers in all industries to $15 per hour.