A man attempted to rob a Hempstead bank on November 29th. 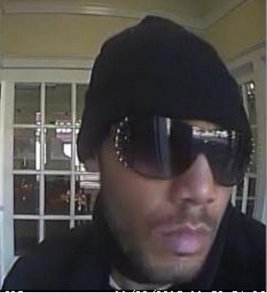 Hempstead, NY - December 11, 2013 - Crime Stoppers and the Nassau County Police Department are seeking the public’s help in identifying the pictured subject in connection with an Attempted Bank Robbery which occurred in Hempstead, New York.
On Friday, November 29, 2013 at approximately 11:58 AM, the subject described as a male black, 20s, 5’9” tall, with a light complexion, beard, and medium build wearing a black knit cap, black jacket, black sweatshirt, black pants, and large sunglasses attempted to rob the Bank of America, located at 730 Fulton Avenue, Hempstead.
Crime Stoppers is asking anyone who can identify the above subject, or has any information about this crime to call out toll free hotline: 1-800-244-TIPS (8477). All calls will be kept confidential. Crime Stoppers is offering a reward for information leading to an arrest.
For further information, contact the Nassau County Police Department Robbery Squad at (516)573-8040.