Photographs by Navid Baraty: Manhattan Viewed from High in the Air. 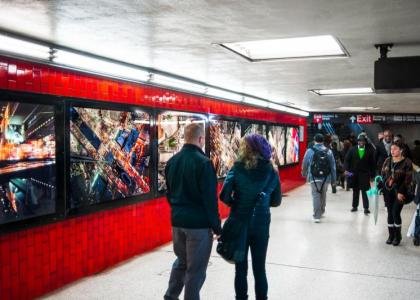 Photographer Navid Baraty, whose work has appeared in National Geographic and other publications, was fascinated with the views seen while photographing from midtown skyscrapers, and he later photographed the Thanksgiving Day Parade from a similar angle in the sky.  In his exploration of city views from high up, Baraty had his camera strapped to his wrist, as he leaned out windows, and on ledges, gaining a view that that gives a new perspective on our role as city dwellers, navigating traffic and getting around the city.

“Everyone walks around Manhattan looking up at the giant skyscrapers, but very few get the chance to look down from so many different vantage points,” he said.

The photographs are angled downward while viewers at the station are looking straight ahead, providing a disorienting shift and furthering the impact of these stunning images.  The light shifts in the images from daytime to nighttime and street markings and patterns are replaced with glowing illumination.

“The Lightbox Program lets us showcase a variety of photographers and a wide range of work;  Navid Baraty’s work has an excitement and adventurous spirit that lets our riders feel as if they are scaling the rooftops as they traverse the city, underground,” said Lester Burg, Senior Manager for MTA Arts for Transit and Urban Design. “Too often, as we race around the city, we forget the magnitude and the scale of Manhattan. Placing these photographs in the subway station used by the many visitors to Lower Manhattan area landmarks – Ellis Island and the Statue of Liberty among others-offers a fascinating glimpse and bird’s eye view where people, cars and buses intersect with our urban architecture.”

The exhibit will remain on view through 2014.  Printing was sponsored by Kodak Alaris and Prestone Media Group on Kodak Professional ENDURA transparency display material.

About MTA Arts for Transit and Urban Design and Its Lightbox Program
MTA Arts for Transit and Urban Design (AFT) encourages the use of mass transit in the metropolitan New York area by providing visual and performing arts in the transit environment. The permanent art program is one of the largest and most diverse collections of site-specific public art in the world, with more than 300 works by world famous, mid-career and emerging artists. AFT also produces art posters, art cards, photography installations and live musical performances in stations, and has re-launched the Poetry in Motion program in collaboration the Poetry Society of America. AFT serves the nearly eight million people who ride MTA subways and commuter trains daily and strives to create meaningful connections between sites, neighborhoods, and people.

The Lightbox Program is a series of rotating photographic exhibits at four locations within the MTA network, curated by MTA Arts for Transit and Urban Design.