Trotta: "What you have done is very impressive and we all expect great things from you when you graduate from college." 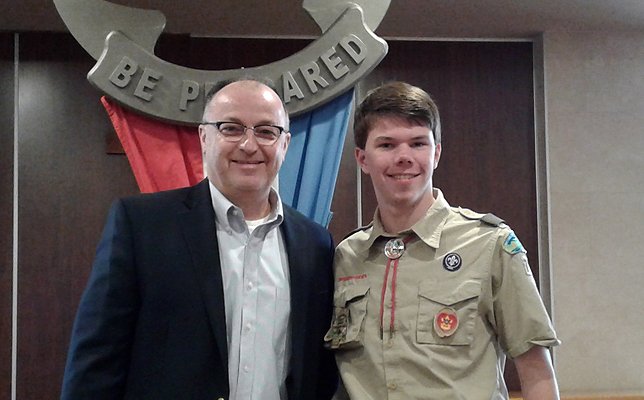 Smithtown, NY - December 8, 2017 - Suffolk County Legislator Robert Trotta congratulated Conor Pickford of Kings Park for achieving the esteemed rank of Eagle Scout. Conor has been active in scouting since becoming a Tiger Cub in 2005 and was initially a member of Troop 539, where he held many leadership positions and then transferred to Troop 75 for his last couple of years in scouting.
For his Eagle Scout Leadership Project, Conor built a walkway as part of an overall 9/11 memorial on the grounds of St. Joseph’s Church in Kings Park. He consulted with Father Sean, the pastor of the church, on the plans, held a fundraiser and supervised the installation of the pavers. The walkway now makes it easier for all to visit the site.With the excess funds, Father Sean was able to purchase benches for people to sit on at the memorial. This project was very meaningful to Conor as he is the son of a NYC firefighter who responded to the World Trade Center 9/11 attack.
“My family and I have known Conor since he was in kindergarten. This award is a testament to his character and leadership skills and is something that he has accomplished while still a teenager. It is a recognition that will stay with him for the rest of his life,” said Suffolk County Legislator Rob Trotta, who represents the district. “What you have done is very impressive and we all expect great things from you when you graduate from college,” added Legislator Trotta.