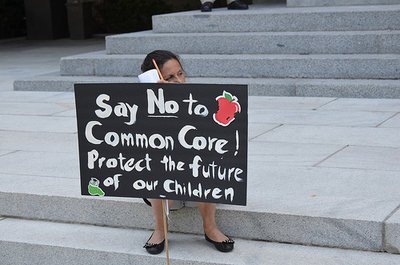 The hearing, sponsored by the Senate's Education Committee, marked the first legislative inquiry into the state Education Department’s new emphasis on test scores in assessing student academic achievement and teacher job performance. State Sen. John Flanagan, R-Long Island, chairman of the committee, said it was the first opportunity for the public to comment on the reforms.

Many speakers questioned the findings of Common Core state tests administered in April confirming that only 31 percent of students in grades 3 to 8 statewide were “proficient” in English and math.

“You should rethink your methodology,” state Sen. Jack Martins, R-Long Island, told Ken Wagner, associate state education commissioner, according to a Journal News article. “I question statistics that say that 50 percent of our kids aren’t college-ready.”

Many parents expressed concern over the detrimental effect the growing emphasis on testing is having on their children’s performance. Jeanette Deutermann, a mother of two from Bellmore, said she had to take her son to the doctor last year because he was so stressed out by test preparation.

Deutermann called on the seven senators in attendance to reduce the state’s reliance on testing. “We are not going to allow our children to take part in this,” she said. “We need help.”

"I see other states such as Michigan, Indiana -- now California -- saying, 'Whoa! Slow down here!' I would like to see New York join that club," Boyle said according to Newsday.

Many also questioned the numerous tests students are required to take during the school year in order to help evaluate teacher performance.

Others voiced concerns over the state’s plan to provide extensive student data to a nonprofit company for the creation of an educational database, calling it a violation of civil rights.

Defending the new reforms, Wagner argued that the move toward more rigorous testing and enhanced instruction is imperative in order to ensure students' chances of future success in college and the workplace.

"If we decided to wait on testing, we would have to wait on instruction," said Wagner. "There always has to be a day one."

Three more hearings set for next month across the state. The last one will be in New York City.