Nassau County beefs up their efforts to combat terrorists and active shooters. 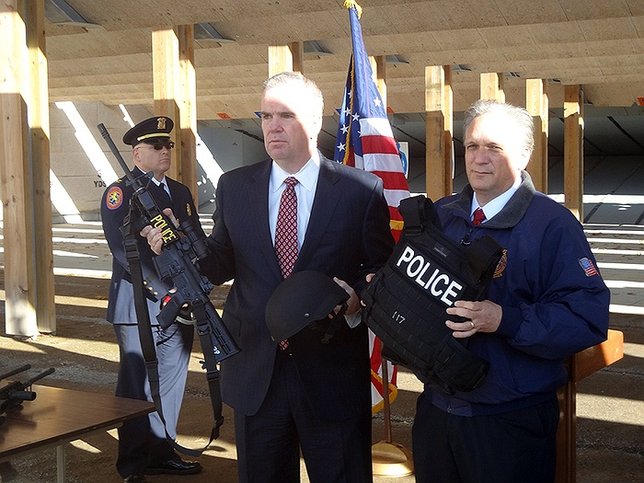 Nassau County Exec. Ed Mangano, and the Nassau County Police Department have announced that NCPD will have specially trained officers with rifles, helmets, and protective gear for better response to active shooter scenarios.

Mangano noted that having such gear available to patrol officers – who are often first responders to the scene of a crime – is vital, especially in light of the rash of mass shootings and terrorist attacks in the United States and across the world in recent years.
"While we hope the day never comes, the Nassau County Police Department is continually training and preparing officers to combat active shooters and acts of terror. To enhance response capabilities, additional Nassau County police officers are being trained and outfitted with powerful rifles that are capable of hitting their targets from long-range distances," he said. "“Active shooters and terrorists are not there to take hostages and negotiate for something — they are there to murder citizens. So this response in terminating those active shooters as quickly as possible clearly will save lives.”
At the press conference announcement, Comissioner Krumpter revealed that, in addition to the rifles, tactical body armor and helmets will be made available as well, in addition to the proper training on how to handle the new equipment and weapons.
"The Nassau County Police Department prides itself on having some of the most well respected and professional law enforcement officers," he said. "To that end, it is imperative that we continue to provide them with the tools and training they need to help keep Nassau one of the safest counties in the nation.”
Previously, only the Nassau County Police’s Bureau of Special of Operations and the Emergency Services Unit were armed with rifles.