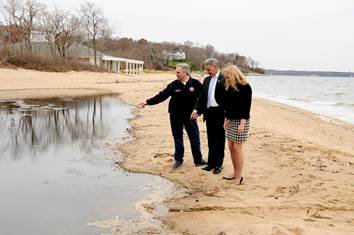 Glen Cove, NY - December 2, 2014 - Nassau County Executive Edward P. Mangano, County Legislator Delia DeRiggi-Whitton and Glen Cove Mayor Reggie Spinello announced a bipartisan agreement to allocate $12 million for studying, designing and installing public sanitary sewers in Glen Cove, Sea Cliff, Glen Head and Glenwood Landing that are not currently connected to the Glen Cove Wastewater Treatment Plant. This project will help protect the water quality at Crescent Beach, which has been closed for swimming due to elevated bacterial levels since 2009. The construction of a modern sewer system with additional pump stations, in place of an aging septic system, will help eliminate bacterial intrusion in the local waterways.

“Glen Cove Mayor Reggie Spinello and Delia DeRiggi-Whitton have been strong partners in identifying the needs of Glen Cove and the surrounding community,” said County Executive Mangano. “The installation of sewers in this north shore community is an important public health initiative as it will protect the local environment and improve the Long Island Sound so that our recreational fishermen and residents can rely on these waters for enjoyment and business alike.”

Mayor Reginald Spinello said, “Working together to do the right thing for our constituents is a true reflection of good government. I thank County Executive Mangano and Legislator DeRiggi-Whitton for their efforts. This investment is critical to the protection of our natural resources and our communities. The project will reduce the nitrogen that is contaminating our drinking water and our harbors, and eliminate bacteria that are closing our beaches and shell fishing areas. It will also increase our resiliency to storms by eliminating septic systems from areas that are prone to flooding.

“I am grateful to the County Executive for working with us on this critical initiative,” said DeRiggi-Whitton. “We are tired of seeing the beaches closed when our children should be enjoying the beauty of the local waters.”

“This $12 million for a feasibility study and construction of new sewers in Glen Cove and other North Shore communities is a victory for North Shore residents, our environment and our economy. This is a great example of all levels of government working together to ensure our waters will be enjoyed and preserved for future generations thanks to sound infrastructure investments,” added United States Congressman Steve Israel.

The project’s original Request-For-Proposals (RFP) has been amended to widen scope of the study to include neighboring communities like Sea Cliff and Glenwood Landing. A RFP for the design and study portion will be issued before the end of 2014, and the study will take place in 2015.