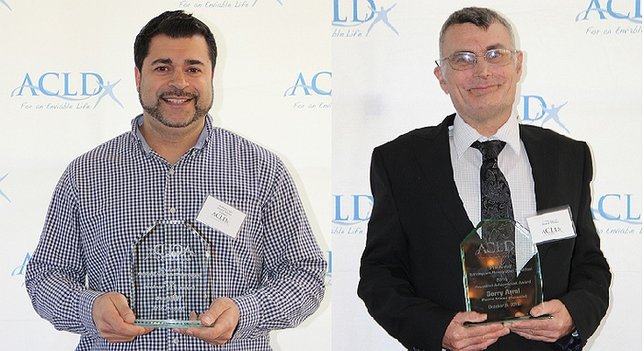 On (l) is Store Manager Anthony Lupo, who accepted ACLD Employer of the Year Award on behalf of Walmart stores of Farmingdale & Westbury. On (r) is Gerry Ayral of Sayville, a Dishwasher at Panera Bread in Bohemia, who was presented ACLD’s Vocational Achievement Award.

Farmingdale, NY - December 1, 2016 - Several Long Island individuals with disabilities as well as employers and a local business professional were honored by Adults and Children with Learning and Developmental Disabilities (ACLD) at its 31st Annual Employment Recognition Breakfast held at Carlyle on the Green in Farmingdale.

ACLD, a leading Long Island based not-for-profit agency supporting people with developmental disabilities, hosts the Breakfast each year as part of National Disability Employment Awareness Month. The event honors employees with special needs who have made notable achievements on the job, salutes businesses that are committed to hiring people with disabilities and encourages other businesses to do the same because, as Jeanie Shelton-Clyne, ACLD’s Assistant Director of Vocational Services said, “it’s what people can do that matters.”

“ACLD has been, continues to be, and will remain committed to helping the people we support pursue their dreams of meaningful, sustainable employment,” said Rich Breuninger, First Vice President of the ACLD Board of Trustees. “ACLD is dedicated to identifying successful employment solutions for people with developmental disabilities.”

This year’s honorees at ACLD’s 31st Employment Recognition Breakfast were:

Nearly 150 people, representing many of the more than 100 Long Island companies ACLD’s Vocational Program partners with, attended the event.

Adults and Children with Learning and Developmental Disabilities, Inc. (ACLD) was founded in 1957. The 501(c)(3), not-for-profit agency serves the needs of more than 3,000 children, teens and adults with learning disabilities, autism and other developmental disabilities, and provides support for their families. ACLD's mission is to provide opportunities for individuals with disabilities to pursue enviable lives, increase their independence and improve the quality of their lives within the community. ACLD employs more than 1,100 people and operates 80 different program sites including group homes and apartment programs across Nassau and Suffolk Counties. Service programs include early childhood services, day habilitation, residential alternatives, vocational training and job placement, recreation programs, respite, family support services, Medicaid service coordination, and medical and behavioral health services.

- Photo Caption: Representing one of the local employers honored at ACLD’s 2016 Employment Recognition Breakfast is Store Manager Anthony Lupo, who accepted ACLD Employer of the Year Award on behalf of Walmart stores of Farmingdale and Westbury.