Governor Andrew M. Cuomo today encouraged New Yorkers to prepare for hazardous winter weather due to the Nor’easter that will move up the east coast and will impact New York City and Long Island. 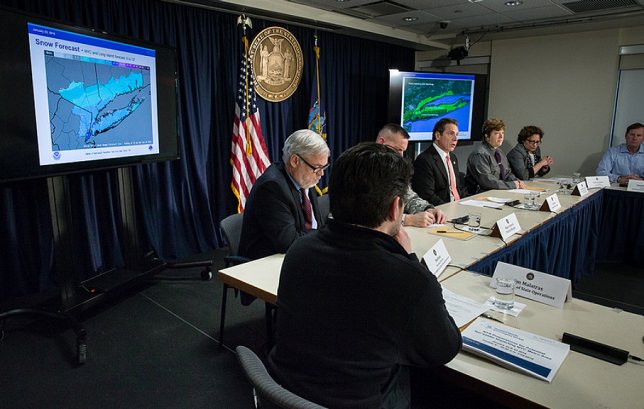 Motorists are advised to avoid any unnecessary travel beginning Saturday morning and throughout the day.

Albany, NY - January 22, 2016 - Governor Andrew M. Cuomo today encouraged New Yorkers to prepare for hazardous winter weather due to the Nor’easter that will move up the east coast and will impact New York City and Long Island. The storm is predicted to bring snow beginning Friday evening with two to four inches by daybreak on Saturday in New York City. The heaviest snowfall is predicted for 4 p.m. Saturday through midnight with blizzard-like conditions. Motorists are advised to remain off the roads and to avoid any unnecessary travel during this time. 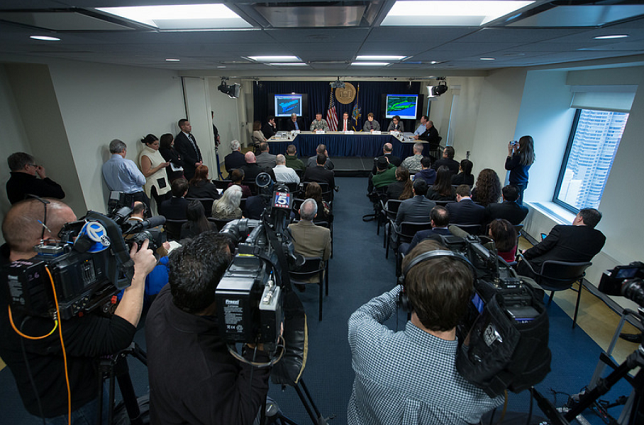 “The winter storm is expected to have a significant impact with potentially hazardous conditions, and we are taking all necessary precautions to keep New Yorkers safe,” said Governor Cuomo. “The state is working around the clock to monitor the storm and proactively deploy resources to communities as needed. We encourage New Yorkers in the downstate region to stay informed, plan ahead, and avoid any unnecessary travel as the storm progresses.”

Governor Cuomo has directed the state Emergency Operations Center to activate in both New York City and Hauppauge tonight to monitor the storm and coordinate resource deployment. The following agencies will be represented at the EOC: 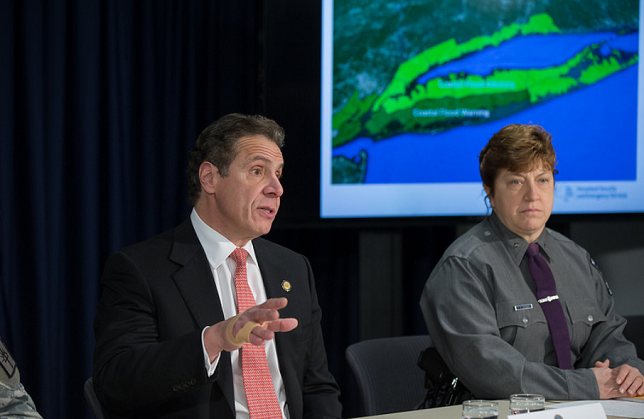 Snowfall totals have been upgraded to 8 to 12 inches in the five boroughs of New York City and Long Island. Blizzard conditions will continue Saturday afternoon through Sunday morning. The Winter Storm Watch for southern Westchester County has been upgraded to a Winter Storm Warning with 6 to 8 inches of accumulation expected. The National Weather Service has issued Coastal Flood Warnings and Advisories for Long Island and New York City. Moderate coastal flooding is expected on Long Island Saturday morning and evening during high tide. Wind gusts up to 60 mph could cause scattered power outages.

The Division of Homeland Security and Emergency Services Office of Emergency Management is coordinating preparations and resource allocations with state agencies and local governments in anticipation of the storm.

At the Governor’s direction, the New York National Guard is prepared to deploy 600 personnel throughout the downstate region to provide emergency support. Approximately 300 are Joint Task Force Empire Shield Soldiers on duty in New York City this weekend.

The National Guard will specifically activate 25 members of the 1st Battalion 69th Infantry with 10 Light/Medium Tactical Vehicle trucks to the Farmingdale Armed Forces Reserve Center as an initial response force to provide mobility and other support to local officials if required.

The Metropolitan Transportation Authority will take the following actions in anticipation of the storm. The most current information on the status of MTA services is always available at mta.info; customers can sign up for text or email alerts at www.mymtaalerts.com.

Subways – Approximately 1,000 track workers will be deployed during the storm in addition to 800 station workers to keep stairs and platforms clear of snow. Third rail heaters and snow melting equipment have been deployed at critical points throughout the system to keep trains moving. In addition, 79 trains are placed into service with scraper shoes, which help reduce icing on the third rail, and 262,500 pounds of calcium chloride and 200,000 pounds of sand have been distributed to various locations within the subway system.

Some express subway lines will run on local tracks starting Friday night after rush hour, as trains are stored underground on express tracks to protect them from the elements.

Buses – The MTA is deploying 37 snow fighting vehicles to plow and salt bus stops in areas where buses have experienced difficulty during past storms. Fifteen tow trucks will be deployed throughout the city to respond rapidly to any buses that need assistance.

Articulated buses will be replaced by shorter buses starting Friday night, and by Saturday morning, all buses on vulnerable routes will have snow tires or chained tires.

The railroad may modify or suspend service in heavy snowfall, during ice storms and blizzards, or if sustained winds over 39 mph occur, especially if there are frozen switches or there is a loss of third rail power. Long Island Rail Road has four modified schedules for storm recovery.

Service could be curtailed or temporarily suspended depending on the impact of a storm. Storm recovery operations will include scrutinizing catenary wires for any impacts from high winds or fallen tree branches. Service options include reductions of service and temporary suspensions of service.

The Port Authority of New York and New Jersey has made extensive preparations for personnel and equipment at all of its facilities. Operations personnel will work 12-hour shifts to ensure that facilities can be operated safely. The airports, bridges, tunnels and PATH also have snow desks where key personnel analyze weather reports and deploy staff and equipment. The Port Authority also is in contact with other local, state and federal officials and agencies to discuss regional preparations for the upcoming winter storm.

The Port Authority urges bus travelers to check with their carriers before going to the bus terminals since many public and private carriers may cancel service if conditions warrant. The agency also may impose speed restrictions on its crossings, or close them entirely, if weather conditions warrant.

The Port Authority has the following winter weather equipment and supplies ready at its major transportation facilities:

New York City Airports – Hundreds of flights have already been cancelled at LaGuardia and JFK Airports. Travelers should check with their carriers to make sure their flight will be taking off before going to the airport. The Port Authority of New York and New Jersey will have supplies of cots and other essential items ready to accommodate passengers who may become stranded at the airports.

The Port Authority has the following winter weather equipment and supplies ready at its airports:

For up-to-the-minute updates on Port Authority crossings, airports and the PATH system, travelers are encouraged to sign up for Port Authority alerts here. Travelers may also call 511 or visit 511NY.org or 511NJ.org for further information on highway conditions.

The New York State Thruway Authority and the Department of Transportation Variable Message Boards will be advising motorists to avoid any unnecessary travel.

The New York State Thruway Authority has deployed additional resources to the region and now has 155 operators ready to operate 56 Large Snow Plows, 38 Medium Snow Plows, 10 Loaders and 4 large snow blowers in the region and has more than 32,025 tons of road salt on hand in the lower Hudson Valley.

Motorists are encouraged to sign up for TRANSalerts e-mails, which provide the latest traffic conditions along the Thruway. Thruway travelers can also get real-time updates by following @ThruwayTraffic on Twitter or by visiting here to see an interactive map showing traffic conditions for the Thruway and other New York State roadways.

The New York State Department of Transportation has more than 1,174 operators and supervisors in the impacted regions and are ready to respond with 440 large plow/dump trucks, 58 medium plow/dump trucks, 88 loaders, four truck/loader mounted snow blowers, six tow plows, and five pickup trucks with plows. In addition, 70 large plow/dump trucks, five loader mounted blowers and three graders have been deployed from non-impacted areas of the state to the regions anticipating this storm. The Department of Transportation has more than 118,000 tons of road salt on hand. To address the potential of high winds and coastal flooding on Long Island, the Department also has six vacuum trucks with sewer jets and 35 chippers. NYDOT's Regional Operations Centers in Hudson Valley and Long Island will be staffed through the weekend.

Motorists are reminded to check 511NY by calling 511 or by accessing www.511ny.org before traveling. The free service allows users to check road conditions and transit information. Mobile users can download the updated, free 511NY mobile app from the iTunes or Google Play stores. The app now features Drive mode, which provides audible alerts along a chosen route while a user is driving, warning them about incidents and construction. Users can set a destination prior to departing and receive information on up to three routes.

The New York State Police currently has 38 4x4/ATV vehicles operational on Long Island and additional assets are available if needed. Ten boats will be provided and staffed by DEC and the State Police to support coastal communities in the event of severe flooding.

State Police regional troop commanders in the affected region are actively identifying resources and staffing patterns are in place to best respond to the storm. State Police will be adding patrols on Long Island, which will include deployment of 38 4x4 patrol vehicles for the duration of the storm. All State Police emergency power and communications equipment in the region has been tested. Additionally, troop emergency management personnel have been pre-designated to staff county emergency operations centers.

State Parks has activated their emergency coordination team to deploy resources.104 plow capable 4x4 vehicles have been positioned across Long Island, New York City and Lower Hudson Valley. Additional emergency equipment has been prepped, fueled and tested and facilities are being secured. In flood prone areas sand bags are being filled and deployed to protect infrastructure. Staff is constructing sand berms at the east end of Jones Beach to help protect Ocean Parkway. State Parks coordinating with PSE&G to use select State Parks on Long Island to serve as staging areas.

All New Yorkers can obtain emergency information through NY-ALERT, the State’s free, all-hazards, web-based alert and notification system. To subscribe, visit nyalert.gov. If you do not own or have access to a computer, call toll-free 1-888-697-6972 or download the app on your smartphone at ialertz.com.

Act Now To Be Prepared for Coastal Flooding

Safe Travel
It is important for motorists on all roads to note that snowplows travel at speeds up to 35 miles per hour, which in many cases is lower than the posted speed limit, to ensure that salt being dispersed stays in the driving lanes and does not scatter off the roadways. Oftentimes on interstate highways, snowplows will operate side by side, as this is the most efficient and safe way to clear several lanes at one time.

Motorists and pedestrians should also keep in mind that snowplow drivers have limited lines of sight, and the size and weight of snowplows can make it very difficult to maneuver and stop quickly. Snow blowing from behind the plow can severely reduce visibility or cause whiteout conditions. Motorists should not attempt to pass snowplows or follow too closely. The safest place for motorists to drive is well behind the snowplows where the roadway is clear and salted.

Some of the most important tips for safe winter driving include:

Drive Safely
The leading cause of death and injuries during winter storms is transportation accidents.

If trapped in a Car
If a blizzard traps you on the road in your car: