Two turkeys were pardoned this year, but in a relatively new competition, people voted for which turkey would be named the National Thanksgiving Turkey of 2013 - a title which went to Popcorn, a four ... 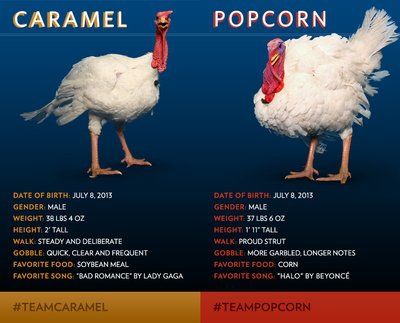 In this year’s White House Thanksgiving “Hunger Games” of sorts, the people have spoken and a turkey has been chosen to be pardoned and receive the title of National Thanksgiving Turkey.

This year’s White House turkey pardon allowed people to vote on which turkey would take the title of the National Thanksgiving Turkey, and Popcorn, a four month old male turkey, was chosen over Caramel as this year’s turkey of choice. Both turkeys were pardoned, but only one could be the star turkey of the year.

"The office of the presidency — the most powerful position in the world — brings with it many awesome and solemn responsibilities. This is not one of them,” said Obama at the pardoning ceremony.

Popcorn weighed in at 37 lbs 6 oz. – slightly lighter than his competitor, Caramel. To add a personal touch, the White House added soundbites of both birds so that voters could hear the “quick, clear, and frequent” gobble of Caramel and the “more garbled, longer notes” of Popcorn.  White House officials also added the birds’ favorite tunes – Caramel’s favorite being “Bad Romance” by Lady Gaga, and Popcorn’s favorite being “Halo” by Beyonce.  Officials even added the birds’ favorite foods, with Caramel showing more discerning taste and preferring soybean meal over Popcorn’s favorite food: corn.

The annual White House turkey pardon is a tradition that dates back to as long ago as Abraham Lincoln’s presidency, when it is believed that his son requested that he write a pardon for the turkey that was destined for their dinner table.  In 1963, President Kennedy was given a gift of a live turkey to be prepared for his Thanksgiving meal, but he returned it to the farm it came from and requested that they let the bird grow and live out its years in peace.  No formal pardon was given.

The first official White House turkey pardon was given by George H.W. Bush in 1989, when he gave the bird a reprieve and sent it back to live at the unfortunately named Frying Pan Park in Herndon, Virginia.

President Obama has pardoned two turkeys each year since he has been president, though the turkey pardoned in 2009 came a bit close to being served to the family at Thanksgiving dinner. Said Obama of the turkey, named Courage, “Thanks to the intervention of Malia and Sasha – because I was ready to eat this sucker – Courage will also be spared this terrible and delicious fate."