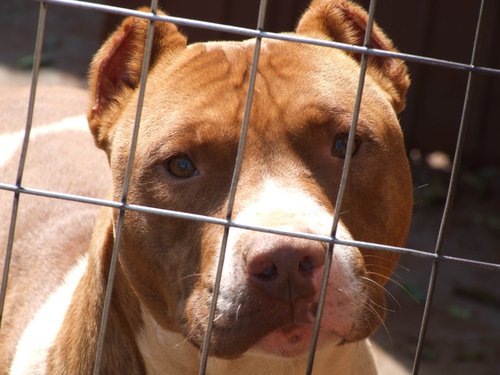 Nassau County, NY - November 27th, 2013 - Nassau District Attorney Kathleen Rice said that a tip to her Animal Crimes Unit has led to the arrest of a Roosevelt man being arraigned today as well as a joint rehabilitation effort with the Hempstead Animal Shelter and North Shore Animal League.

Roosevelt 41-year-old Shawn Christopher was arraigned today on three counts of criminal animal neglect and one count of criminal possession of marijuana in the fourth degree.  He was conditionally released to probation and is due back in court on Jan. 16, 2014.  The maximum sentence for each of these Class A misdemeanors is one year in jail.

“Neglect and abuse of the kind suffered by these dogs is always heartbreaking and should never be without consequence,” DA Rice said. “My office will continue to work with local authorities and shelters to be an advocate for animals when they need it.”

Acting on a tip to DA Rice’s Animal Crimes Unit (ACU), members of the NCPD DA Squad and NCDA ACU responded to a residence at 21 Thoma Place in Roosevelt on Nov. 7. Upon arrival at the residence, detectives saw a dog with serious injuries in the backyard.  The dog had blistered skin, bloody raw open sores, cracked paws, and severe swelling to the face and eyes.

Detectives then made contact with Mr. Christopher, the occupant of the residence who was also the owner of the observed dog and two others.  Further investigation of the additional two dogs, which were the initial dog’s puppies, revealed similar injuries.

Mr. Christopher was arrested by detectives from the NCPD DA Squad and the NCDA Animal Crimes Unit and charged with one count of animal neglect for each of the animals.  Additionally, Mr. Christopher was found to be in possession of over 2 ounces of marijuana and was charged with that as well. He was released on his own recognizance.

The official name of the animal charge, Article 26 - Section 353 of New York State’s Agricultural and Markets Law, is “Failure to provide proper sustenance.”

The North Shore Animal League has agreed to take in the dogs for the remainder of their rehabilitative care.

Earlier this month, DA Rice started a Countywide ‘Council on Animal Protection & Safety’ in order to provide a forum for local government and non-profit agencies in Nassau  County to coordinate efforts on cases like this one.

Members of the public can report animal crime directly to DA Rice’s Animal Crimes Unit in four ways: (1) by walking in to the DA’s Criminal Complaint Unit at 272 Old Country Road; (2) by calling the DA’s 24 hour Animal Crimes Tipline at (516) 571-2245; (3) via Internet complaint form at www.nassauda.org; or (4) via email to AnimalCrimesUnit@nassauda.org.  The public should always call 911 in cases of active emergencies or imminent danger.