Drivers Should Use Caution and Watch for Snow Plows. 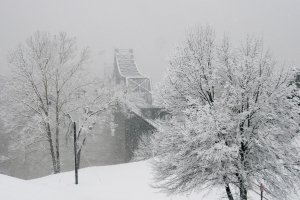 Albany, NY - November 26, 2013 - Governor Andrew M. Cuomo today urged New York drivers to use caution as the first winter storm of the season begins to impact parts of the State. With heavy use of roadways expected during the week for holiday travel, the Governor has directed the State Thruway Authority and Department of Transportation to undertake full preparation measures to ensure the state’s roads are as safe and accessible to motorists as possible. The Governor also urged drivers to use extreme caution while traveling during ice or snow conditions, and to arrange travel plans to avoid being on roadways during the storm.

The National Weather Service has issued a Winter Storm Warning for all of Western New York, and parts of the Finger Lakes region, Central New York, and the Adirondacks from mid-Tuesday afternoon through early Thursday morning. Some areas could see up to a foot of snow, possibly mixing with sleet and ice up to a half-inch, and winds gusting up to 30 mph, which could cause hazardous travel conditions.

“As New Yorkers are beginning to travel for the Thanksgiving Holiday, we are also preparing for the first major winter storm of the year which is expected to bring snow and ice to communities across the State,” Governor Cuomo said. “Recognizing that the harsh weather as well as the increased use of roadways has the potential to cause serious inconvenience for motorists, I have directed the State’s transportation agencies to take all necessary preparations to be ready to clear roadways as quickly as possible. While the State will be working around the clock during this storm to help keep our roadways free of snow and ice, I urge drivers to use extreme caution, put safety first, and plan accordingly to avoid roadways during poor weather.”

“The Thruway’s Winter Maintenance Program is second to none,” said Thruway Chairman Howard P. Milstein. “Our preparations allow us to provide a superior response when winter weather conditions impact the roadway and are a key factor in the Thruway’s exemplary safety record.”

“Thruway employees work very hard all year long to ensure safe, reliable driving conditions for our customers, and this is especially true during the tough winter conditions,” said Thruway Executive Director Thomas J. Madison. “By using innovative methods to fight snow and ice, we will continue to provide safe and consistent road conditions during the winter months.”

“Safety is NYSDOT’s number one priority, and our maintenance staff at the State Department of Transportation is highly trained and work hard all winter to keep highways safe for motorists,” NYSDOT Commissioner Joan McDonald said. “It is imperative that motorists take responsibility for driving prudently for the conditions, knowing that roads may be slippery and snow-covered during winter storms.”

State Police Superintendent Joseph A. D'Amico reminds motorists of the hazards of winter driving. "I urge all who use the New York State Thruway or any roadway to exercise extra caution during the winter months. Make sure your vehicle has good tires and slow down when driving on snow-covered roadways. Keep in mind that bridges freeze before roads, leave extra room between yourself and other vehicles. Our goal and that of our partners in the New York State Thruway Authority and Department of Transportation is for everyone to arrive safely during the winter and at all times of the year."

On the New York State Thruway, hundreds of employees are available to work round-the-clock for every snow and ice event as part of the Thruway’s winter maintenance and safety efforts, using more than 200 large plow trucks with salt spreaders as well as smaller plow trucks, front-end loaders and large snow blowers.

The Thruway Authority regularly considers new innovative snow and ice removal techniques, and in recent years began utilizing an anti-icing mix of sugar beet juice and brine used to pre-treat the roadway, which helps prevent the formation of ice and can reduce the need for overtime staffing.

This year, Thruway officials expect to use:

NYSDOT has nearly 3,800 trained snowplow operators and supervisors that are responsible for snow and ice control on more than 36,000 lane miles of state highway. A fleet of more than 1,430 snowplows, 325 bucket loaders, which are used for loading salt into snowplows, and 50 snow blowers are used by NYSDOT for routine winter operations. Approximately 754,000 tons of salt along with a variety of other anti-icing chemicals are used each season, depending on the severity of the weather.

It is important for motorists on all roads to note that snowplows travel at speeds up to 35 miles per hour — which in many cases is lower than the posted speed limit — in order to ensure that salt being dispersed stays in the driving lanes and does not scatter off the roadways. Oftentimes on interstate highways, snowplows will operate side by side; this is the most efficient and safe way to clear several lanes at one time.

Motorists and pedestrians should never assume a snowplow driver can see them. Snowplow drivers have limited sight distances, with the wing blades of the vehicle obscuring their side views. The size and weight of snowplows make it very difficult to maneuver and stop quickly. Snow blowing from behind the plow can severely reduce visibility or cause “whiteout” conditions. Motorists should not attempt to pass snowplows or follow too closely. The safest place for motorists is well behind the snowplows where the roadway is clear and salted.

Some of the most important tips for safe winter driving include:

Motorists should also include the following emergency items in their vehicles:

For real-time traffic and road condition updates, Thruway travelers are encouraged to visit www.Thruway.ny.gov, sign up for TRANSAlert emails at http://www.thruway.ny.gov/tas/index.shtml, or follow @ThruwayTraffic on Twitter. Also for more information and to sign up for free alerts about hazardous travel conditions in your area, go to www.nyalert.gov For weather forecasts, visit National Weather Service – Albany at http://weather.gov/aly .

NYSDOT provides a travel advisory system that features real-time travel reports and can be accessed by phone at 511 or online atwww.511ny.org. The Web site features a color-coded map indicating which state roads are snow covered, ice covered, wet, dry, or closed to help travelers determine if travel is advisable. The system provides real-time snow and ice conditions for interstates and other heavily traveled roads, as reported by snowplow operators.