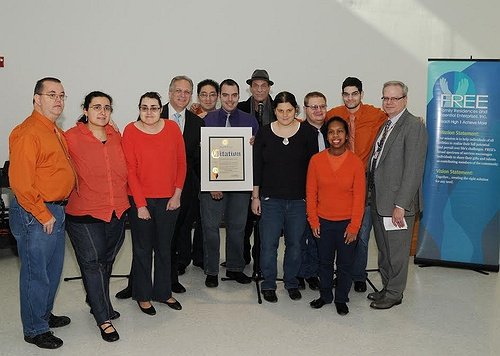 Old Bethpage, NY - November 25, 2014 - Family Residences and Essential Enterprises, Inc. (FREE) hosted acclaimed actor, and singer, Robert Davi as he met with the FREE Players Jazz Ensemble.  The Jazz ensemble is a group of differently-abled individuals who participate in FREE’s theater day program.  Mr. Davi participated in a question and answer period, watched the group perform, provided encouragement, and shared his professional expertise with them.  Nassau County Executive Edward Mangano was also on-hand to present FREE and the FREE Players Jazz Ensemble with an award for their many achievements.

One of the most recognized “tough guys” in cinema and television today, Mr. Davi is considered one of the top Bond villains of all time for his portrayal of Fran Sanchez in License to Kill. Over the past 30 years, this Long Island native has developed a “cult” following, and has starred in over 130 films, such as Die Hard, The Goonies, Showgirls, Predator 2 and The Iceman.

The FREE Players Program was developed back in 1993 and involved a number of FREE employees that volunteered their time to support individuals that loved to sing, dance and act.  FREE’s programs continue to help foster independence, productivity and individual development.  The FREE. Drum Corps has performed not only locally but nationally.  They have made history as the first Special Needs Drum Corps to perform at many events such as the Waterside Stage at Downtown Disney in Orlando, Florida, the Dayton Arena in Dayton, Ohio for Winter Garden International, which is an International Drum Corps competition and Newsday’s Marching Band Festival.  Just recently they were the first Special Needs Drum Corps to perform at the Columbus Day Parade in New York City.