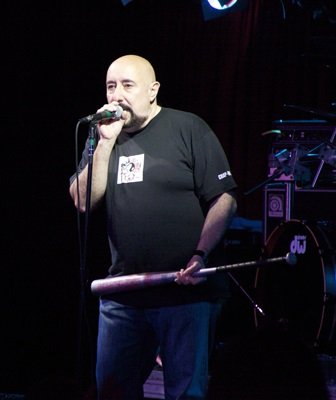 Peppi Marchello, lead singer of the Long Island-based band the Good Rats, died of a heart attack yesterday evening at approximately 9:00 PM. Marchello was only 68 at the time of his passing, and although he was dealing with health issues, fans were shocked when they found out about his death.

In June, the singer had to have open heart surgery,  but seemed to be on the mend. He had been receiving well-wishes from fans and friends on the Good Rat's Facebook Page as recently as yesterday, who were devastated by last night's news.

Countless fans flocked to their page to grieve, and share their condolences with Peppi's family, and bandmates. The news came shortly after a post cancelling an upcoming show at Hoyt Farm earlier that day, which was said to be cancelled "due to unforeseen circumstances". The messages left by fans included photos, recollections of concerts, and all of them reflected the sentiment that the world has lost a truly gifted singer, and songwriter.

In a statement released by the Marchello Family, released on the blog of Good Rat's publicist, and close friend Cliff Meth, Cliff had the following to say about the loss of Peppi Marchello, and his musical legacy: “Peppi’s life was about his family and his music...His love for songwriting and performing never diminished and he continued playing as many as 100 times each year until the very end. He was adored by his legion of fans who regarded Peppi himself as an event they wanted to be part of. He will be dearly missed.”

Originally formed in 1964, the Good Rats originally played as the U-Men, eventually changing their name, and releasing their first self-titled album as the Good Rats in 1969. Shortly after in 1974, they released Tasty, their most well-known, and loved album, followed by numerous album releases throughout the 70s. They played at all of the big venues - from Nassau Coliseum, to Madison Square Garden, and in recent years, have been playing at numerous local Long Island venues, as well as locales across the country.

In 2008, the band was inducted into the Long Island Music Hall of Fame, further solidifying their status as local icons.

Once called "the world's most famous unknown band" by Rolling Stone Magazine, the Good Rats, and Peppi Marchello, are always thought of fondly by Long Islanders, and fans across the world for their unique sound, and heartfelt tunes.

Peppi Marchello has left a hole in the Long Island music scene that will not be an easy one to fill, and he will be sorely missed by fans locally, and from around the globe.

According to Cliff Meth, funeral arrangements are currently underway, and fans will be welcome to attend, and share their condolences. Peppi's son Stefan, who had played with the Good Rats in recent years, made the following statement: “My father was a blue collar rocker,” said son Stefan. “His funeral will be open to his fans—that’s exactly what he would have wanted.”

Update, Thursday, July 27th, at 2:50PM: As per a statement released by Cliff Meth, Peppi's funeral services will be held at the Saint James Funeral Home this Saturday and Sunday from 2PM - 4PM, and 7PM - 9PM. Mass will be held on Monday, July 15th at 11AM, at Saint Philip & James Church, also located in Saint James, and fans are welcomed and encouraged to attend, and pay their respects.