The holiday season can't begin in New York until Rockefeller Center's tree is illuminated by thousands of lights! 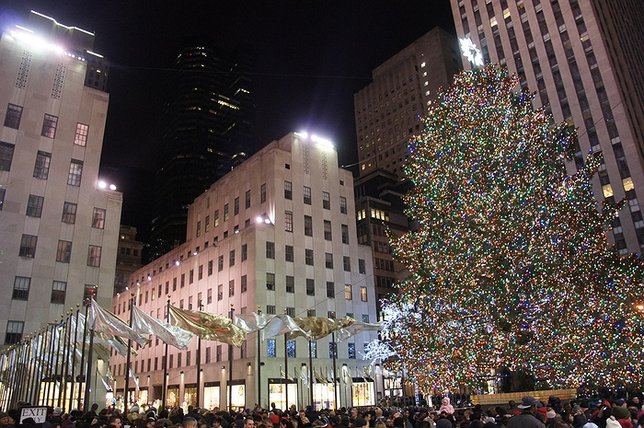 The iconic tradition will once again stand tall in Rockefeller Plaza!

Each year, the Rockefeller Center Christmas Tree stands as perhaps the most iconic of New York's holiday traditions. At 94-feet-tall, this year's tree is not only unfathomably enormous, but it is the second tallest tree ever placed in Rockefeller Center and only six feet shorter than the record-setting tree from 1999. Officially, the Rockefeller Christmas Tree has been a hallmark of the holiday season since 1933, but workers during the Great Depression In years prior would pick up their paychecks by a 20-foot decorated tree.

The 84th Annual Rockefeller Center Tree Lighting Ceremony is scheduled to be held on Wednesday, November 30th, and will be broadcast live on NBC from 7 PM – 9 PM. Hosted by Matt Lauer, Savannah Guthrie, Al Roker, and Natalie Morales, the celebration will feature a variety of live performances and appearances by celebrities.

This year's tree is a Norway Spruce that was located in a residential area of Oneonta, New York.  Graig and Angie Eichler, who own the home that the tree was towering next to, told NBC News, “we'll miss the shade but for the most part we're happy to gain the space back, because it did monopolize the entire yard.” The tree, which is estimated to be 90-95 years old and weighing 14 tons, was lowered by two cranes and transported nearly 80 miles to New York City on a flatbed truck.  It has also been topped once again with the “Swavoski Star,” a 550-pound piece designed by Michael Hammers that has been featured on the tree each year since 2004.

For those saddened by the chopping down of an old and beautiful tree, take solace in the fact that at the end of the season, the tree will be turned into lumber and donated to Habitat for Humanity.

With more than 30,000 lights, the tree lighting ceremony will be an incredible display whether you're watching it live or from the comfort of your couch. For those planning to head to Rockefeller Plaza, avoiding the traffic and parking hassle can be easily accomplished with a quick trip on the Long Island Rail Road. The tree is located at Rockefeller Plaza between West 48th and 51st and Fifth and Sixth Avenues, and will be on display through January 7th, 2017.  Expect a crowd even on the chilliest of days, as the tree regularly attracts 500,000 people each day.


Are you planning to make the trip to NYC to see the 84th Annual Rockefeller Center Tree Lighting Ceremony? If so, be sure to send your pictures to info@longisland.com for inclusion in our holiday gallery!