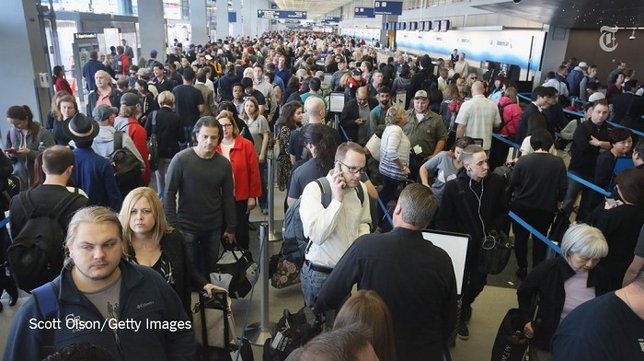 Washington, DC - May 30, 2016 - On one of the busiest travel days of the year, and on the heels of weekend airport lines that were still just too clogged, U.S. Senator Charles E. Schumer today called for a new surge in the hiring of additional Transportation Security Administration (TSA) officers at local New York City airports.

Just recently, Secretary Jeh Jonson, of the Department of Homeland Security, requested a reprogramming of $28 million to fund an immediate conversion of 2,784 Transportation Security Officers (TSOs) from part-time to full-time. Johnson also requested approval to hire an additional 600 agents in light of continued long lines at airport screening. Schumer says this new plan needs swift congressional approval and he will lead the charge to get it implemented as soon as possible.

“With out of control wait times at our nation’s airports, more could and should be done to help unclog the lines and improve security,” said U.S. Senator Charles Schumer. “We desperately need to convert thousands of part-time TSA officers to full-time TSA officers in order to ward off the impending ‘flypocalypse’ that will ensue when the busy summer travel season soon begins. Congress should quickly approve this request and TSA should prioritize the hiring and conversion of these officers at local New York City-area airports.”

The TSA says this reprogramming request will enable the agency to screen approximately 82,000 additional passengers each day. Following reports of outrageously long wait times at local airports, Schumer said that Congress should swiftly approve the TSA’s request for these funds so that conversion of officers from part-time to full-time status can begin immediately.

Schumer is also urging the TSA to prioritize transitioning a significant number of officers at New York airports to full-time status, as it will help provide some additional relief to not only to local New Yorkers, but to travelers across the country.

As a result of Schumer’s recent efforts, the TSA announced it would hire more than 750 additional officers to help alleviate wait times this summer traveling season. Specifically in New York, LaGuardia, JFK and Newark Airports have each been allocated an additional 72 officers, for a total of 216 officers in the New York- metro area.

Schumer says New York City-area airports still need more of these agents if we are going to address outlandish wait times for good.

New York City is home to some of the busiest airports in the country. According to the Port Authority, 126 million air travelers utilize its airports each year. Moreover, this summer traveling season is expected to be one of the busiest. According to reports, more than 220 million passengers are expected to fly this summer season, which Schumer says could greatly impact wait times at local New York City-area airports like JFK and LaGuardia—even the nation. Schumer said that delays at the New York airports do not only affect travelers coming to and from the region, they can ripple across the entire country.

The Port Authority of NY/NJ, which operates JFK Airport, LaGuardia Airport and Newark Airport, recently pointed to an increase in security line wait times for air travelers. In a May 4th letter to the TSA Administrator, the Port Authority’s Aviation Director and Chief Security Office wrote that during the period March 15- April 15, there were 253 occurrences of more than 20 minute waits in 2016 when compared to 10 instances over the same period the year prior.

The Port Authority of NY/NJ says the average maximum wait time at JFK Airport between March 15th and April 15th increased 82 percent from the same period last year. The letter says that JFK Airport's daily average of maximum wait times during this period increased 82 percent from 11.5 minutes in 2015 to 20.9 minutes this year.  The letter also states that the absolute maximum in 2016 was 55 minutes vs. 30 minutes in 2015. The Port Authority says that the issue is similar at LaGuardia Airport and Newark.

Earlier this month, Schumer pushed the TSA to address the issue of long wait times, specifically by adding additional TSA agents to NYC airports as soon as possible and by increasing the number of highly trained Passenger Screening Canine Teams at New York City airports. Schumer explained that Passenger Screening Canine Teams offer a unique yet efficient way to screen air travelers. Schumer said that these canine teams will not only help address wait times but also provide even greater detection accuracy.

Schumer said the TSA has already taken some necessary steps to address long wait times but more could and should be done.  Thus far, according to the TSA, the agency has given Federal Security Directors at airports added discretion to assign TSA personnel at airports to directly support screening at checkpoints; solicited approximately 150 volunteers from among its TSO workforce to accept temporary reassignment from less busy to busier airports; TSA headquarters personnel have volunteered to work at airports; deployed optimization teams to the nation’s 20 busiest airports to address excessive delays; stood up an Incident Command Center at its headquarters to monitor checkpoint trends in real time aggressively trouble-shoot any issues that may arise at the busiest airports around the country.