Illegal Alligator Turned in to SPCA by Miller Place Owner

This is the 19th alligator on Long Island turned in over a period of just over a year. 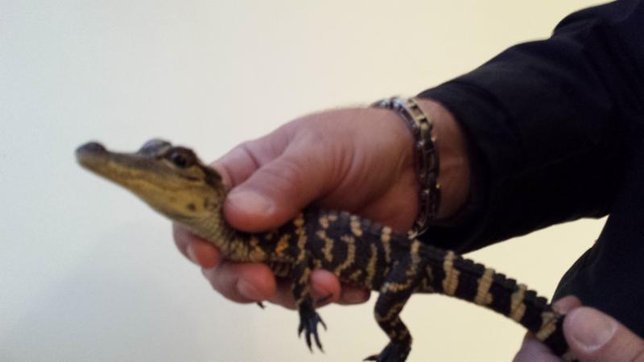 The owner of an illegal alligator turned the animal in to the Society for the Prevention of Cruelty to Animals (SPCA) this week. Animal welfare crews rescued the 2-foot reptile from the owner’s home in Miller Place.

According to Suffolk SPCA Chief Roy Gross, the owner – who was not named – missed a reptile amnesty event that was held at the Selden Petco store in September. During the amnesty event, owners of alligators and other illegal animals were allowed to turn the pets in, no questions asked.

The fine for owning an alligator is $150, however abandoning an alligator is punishable by up to one year in prison. There were 16 abandoned alligators on Long Island in one nine month period.  One was left in an Applebees parking lot, and another was found swimming near an area where people launch canoe’s and kayaks.

Many people buy alligators online or in states where they are legal and then abandon them when they grow too big to keep in captivity. Alligators grow about one foot per year, according to Gross. This particular owner bought theirs in Florida.

“There is a reason why they’re illegal. They’re dangerous, they’re unpredictable,” Gross said in a report from CBS News. “An alligator could be up to five feet long. They are capable of killing someone.”

The alligator that was turned in appeared to be in good health. Gross added that the owner did the right thing by turning in the alligator.

Photo courtesy of the Suffolk SPCA.