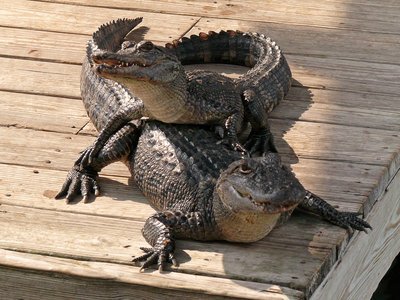 In the first Illegal Reptile and Amphibian Amnesty Day in New York State, the Suffolk County SPCA landed an impressive haul on Saturday that included three alligators that had been kept as pets.

The event, which took place at Sweetbriar Nature Center in Smithtown, allowed people to drop off illegal animals, no questions asked.  Only reptiles and amphibians were accepted, and no penalties were given to individuals who handed over illegal reptiles, as the primary goal of the event was to prevent people from letting unwanted illegal reptiles or amphibians loose on Long Island.

The event was particularly valuable in that three alligators ended up in the safe hands of the SPCA.  The alligators were 3 feet, 3.5 feet, and 4.5 feet long.  Keeping an alligator is illegal, and includes a fine of up to $250, but releasing an alligator into the wild is a misdemeanor that can lead to jail time.

Just last week, four alligators were fished out of the Peconic River in Calverton near a boat ramp.  The 2- and 3-foot-long alligators were sent to the Long Island Aquarium and Exhibition Center.

Besides alligators, the SPCA also took in unwanted legal reptilians, including a 5-foot-long common boa constrictor, a Greek tortoise, an African spur tortoise, and an alligator snapping turtle.

Due to the success of the event, the SPCA plans on holding another amnesty day in the future.