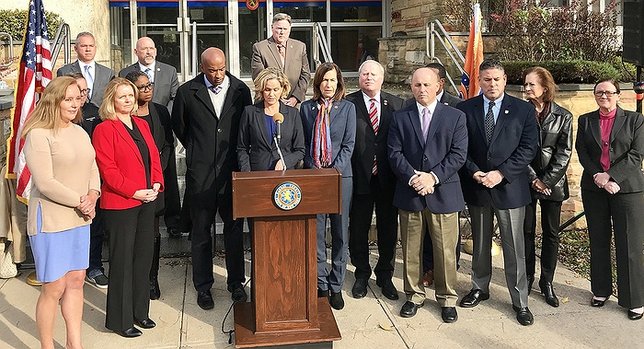 Manhasset, NY - November 15, 2018 - Nassau County Executive Laura Curran today was joined by Minority Leader Abrahams, members of the Nassau County Legislature’s Democratic caucus and Police Commissioner Patrick Ryder to announce a plan to reopen the Nassau County Police Department Sixth and Eighth Precincts as part of an agreement on the 2019 Nassau County budget. The agreement also provides funding for mental health first aid and a 12-month pilot bus services.
“Government is at its finest when elected officials work together in the best interests of the people,” said Curran. “This agreement finalizes our 2019 county budget and restores precincts closed by the prior administration. I’m proud of the budget agreement with the Democratic caucus, and we are standing together to announce these precinct reopenings.”
"The agreement with the County Executive shows that we are able to compromise for the greater good of Nassau County residents and taxpayers. We hope the majority follows our lead and cooperates in the hard work of straightening out Nassau County's finances," said Minority Leader Kevan Abrahams.
The $3 billion budget agreement also provides critical dollars for mental health first aid, a need highlighted by Legislator Siela Bynoe.
“Legislator Bynoe recognized that comprehensive mental health first aid is an idea whose time has undeniably arrived. I wholly support Legislator Bynoe’s proposals as laid out in her bill numbered 440-18 that calls for mental health first aid training to county employees who have significant interaction with the public,” said County Executive Laura Curran.
The prior administration moved to close precincts. Curran agrees with Legislator Ellen Birnbaum that it is time to introduce a concrete plan to reopen the precincts to maintain the historically low crime levels and exemplary service of the NCPD. This past weekend the county’s 911 system experienced increased call waiting times and residents were asked to contact precincts for immediate assistance if they experienced a delay.
“Calling 911 is our key emergency response” said Curran.  “And turning to our precincts as a backup is part of our policing DNA and part of our community DNA.  Our residents need to know that they can get the service that they have come to expect from the Nassau County Police Department in each and every precinct.
“I want to thank Legislator Ellen Birnbaum for her efforts to get the Sixth Precinct reopened,” said Curran. “I also want to acknowledge Presiding Officer Richard Nicolello and Legislator John Feretti and their support for reopening the Eight Precinct.”
The Precincts are expected to be opened in 2019.  The reopening plan calls for hiring new commanding officers as well as filling civilian positions in both precincts. Capital improvements are necessary before the doors open as full precincts. Curran also highlighted the need to address through collective bargaining the shortage of detectives due to non-competitive salaries.
“We are moving immediately to get these two precinct buildings operable and staffed,” said Curran.  “With the budget agreement, we will turn our full attention to collective bargaining including our ability to appoint detectives.”
The budget agreement also supports additional staffing for both the Office of Minority Affairs and CASA as well as pilot bus programs championed by Legislator Delia DeRiggi-Whitton to fund bus service in Port Washington, and by Legislator Arnie Drucker to restore Saturday bus service with shuttle vehicles in Plainview.
With this agreement, the County will discontinue its legal actions on the budget process.  Resources are available in the executive budget for each of these initiatives including reopening the Sixth and Eighth Precincts, mental health first aid, pilot bus services, staffing for Minority Affairs and CASA and additional Public Safety Officers.
“This budget is a responsible approach to key initiatives and doesn’t unreasonably stretch County finances,” said Curran. “I am proud of my colleagues in the democratic caucus who worked with me to finalize this budget, restore the Sixth and Eight Precincts and provide funding for critical services for the residents of Nassau County."