USA Luge has announced the second Running of the Balls (ROTB2) fundraiser, a fun and exciting initiative to help support the team’s athletes and programs. 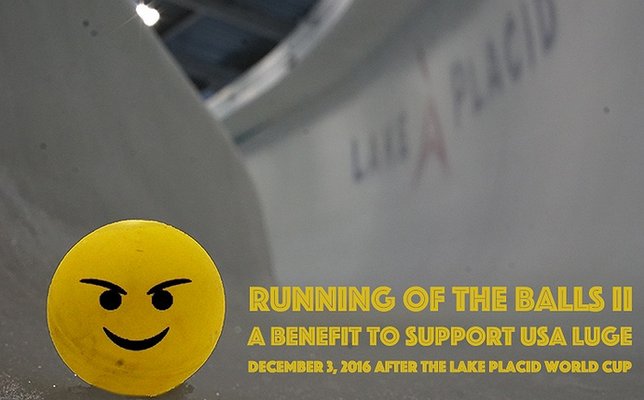 Fundraising even brings luge and lacrosse to Olympic Sports Complex.

Lake Placid, NY - November 15, 2016 - USA Luge has announced the second Running of the Balls (ROTB2) fundraiser, a fun and exciting initiative to help support the team’s athletes and programs.

The event will take place Saturday, Dec. 3, shortly upon conclusion of the Viessmann World Cup luge event in Lake Placid.

At the inaugural ROTB last March, over 900 lacrosse balls negotiated the nearly one-mile course down Mount Van Hoevenberg. The lax balls will be donated by Summit Lacrosse.

Fans will be able to participate in this unique event by entering as many balls as they’d like in this one-of-a-kind race that benefits USA Luge.

Cash, prizes from USA Luge sponsors and goods from local purveyors will be offered for the top five balls and the last place ball.

“We couldn’t imagine how successful and how much fun it was to hold the first ROTB race,” said Gordy Sheer, USA Luge Director of Marketing and Sponsorships. “Now we’ll do it again in front of the World Cup audience at the track. The money raised will help defray the costs for our athletes to travel and compete internationally as we work our way to the 2018 Winter Games in PyeongChang.”

On-site fans will be treated to coverage on large screens thanks to the International Luge Federation, Carr-Hughes Productions and the N.Y. Olympic Regional Development Authority.

Prizes will be awarded as follows:

In the 2015-2016 World Cup season, USA Luge set a team record with 18 medals. High finishes in the overall rankings added to the most successful World Cup campaign in team history.

Erin Hamlin, of Remsen, N.Y., Sochi Olympic bronze medalist and 2009 World Champion, finished fourth on the season, with Summer Britcher, of Glen Rock, Pa., in fifth place. Britcher tied for the most World Cup wins last year with three and held the leader’s bib in mid-season.

The doubles team of Matt Mortensen, of Huntington Station, N.Y., and Jayson Terdiman, of Berwick, Pa., in just their second season together, finished fifth, an improvement of two places from 2014-2015. The Sochi Olympians had top finishes of fourth and fifth places on the World Cup tour.