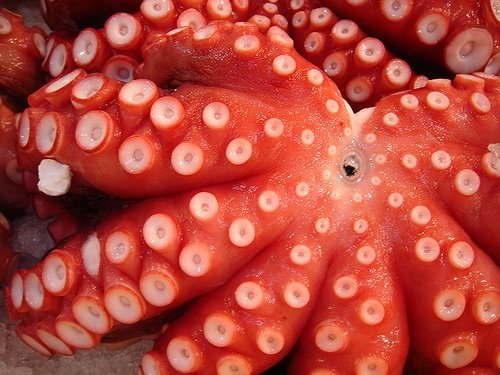 Patchogue, NY - November 13, 2014 - St. Joseph’s College (SJC) is pleased to announce the arrival of six live Pacific Ruby Octopuses from California to its Long Island Campus located in Patchogue, New York. The marine animals, which were delivered to SJC on Monday, October 20, are part of a new program in the Department of Biology to study their defense mechanisms through observation and research.

“Having the opportunity to study octopuses at the undergraduate level is something only a handful of institutions can offer, so I try not to hover over the students’ research and allow the lab to belong to them,” said Heather Bennett, Ph.D., assistant professor in the Department of Biology on the Long Island Campus of SJC. “It requires a great commitment by the students to study these animals and they are eager to learn.”

Acquired by SJC in order for biology students to study cephalopod defense mechanisms, including camouflage, dexterity and arm regeneration, the octopuses currently reside in the cephalopod lab—each in its own tank with a 700-gallon salt water filtration system—outfitted with the exact specifications needed to accommodate marine animals. Each individual tank has a weighted lid to prohibit these strong animals from exiting their tanks and a plastic tube to mimic their natural habitat where they are known to curl up in dens and in between rocks for safety.

“The octopuses are just so different by being able to change color, alter the texture of their skin and regrow their arms,” said Dr. Bennett. “They have no backbone, but they have a big brain. They are the smartest of the invertebrates and not many people study them. There is a lot to learn.”

Upon their arrival, St. Joseph's College students released each of the six octopuses into its new habitat. Led by Dr. Bennett, students were shown how to care for the animals, including daily feedings, weigh-ins and how to maintain water, salt and light levels to help the octopuses thrive.

Moving forward, SJC’s Department of Biology is in the process of setting up an octo-web cam that streams video of the octopuses to the College’s website for public viewing, and has plans to publish and present its research findings on these unpredictable and interesting creatures in the future. In addition to the octopuses, biology students on the Long Island Campus are also able to study live newts and tadpoles.

For more information about the Department of Biology at SJC, contact the Long Island Campus Office of Admissions at 631.687.4500 or visit the website.

About St. Joseph's College
St. Joseph’s College has been dedicated to providing a diverse population of students in the New York metropolitan area with an affordable education rooted in the liberal arts tradition since 1916. Independent and coeducational, the College provides a strong academic and value-oriented education at the undergraduate and graduate levels, aiming to prepare each student for a life characterized by integrity, intellectual and spiritual values, social responsibility, and service. With campuses located in the Clinton Hill area of Brooklyn and in Patchogue, Long Island, the College offers degrees in more than 29 majors, special course offerings and certificates, affiliated and pre-professional programs.