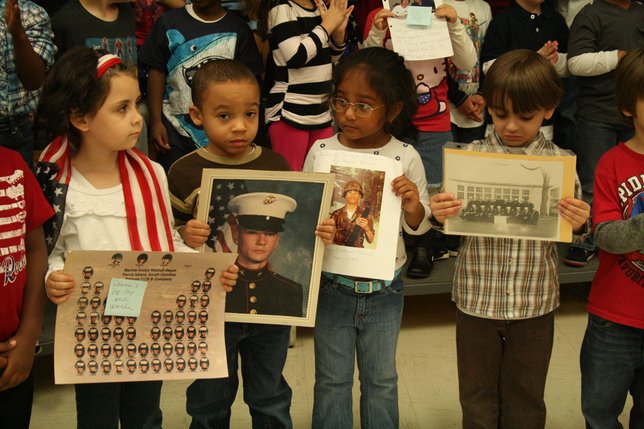 Mastic Beach, NY - November 13th, 2013 - Last week, kindergarten and first-grade students at Tangier Smith Elementary School in the William Floyd School District, held their annual Veterans Day concert and had the opportunity to express their gratitude to veterans for their service through the singing of songs and with the presentation of thank you cards.

“We feel that it’s important to show our appreciation for our armed forces veterans and those who are currently serving,” said Wendy Gross, kindergarten teacher and organizer of this event. Students both sang and signed a number of patriotic songs to the more than 100 parents and approximately 20 veterans and current service members in attendance from the American Legion Arthur H. Clune Post 1533, the 106th Rescue Wing of the New York Air National Guard and from students’ families. Among the songs students performed were “I Pledge Allegiance,” “My Country ‘Tis of Thee,” “You’re a Grand Old Flag,” “Yankee Doodle Dandy” and more.

New York State Senator Lee M. Zeldin, himself an army veteran, announced that there would be a special plaque placed on a bookcase in the school library commemorating Herbert DeGiovine, a World War II veteran and a 2009 recipient of a William Floyd High School diploma through “Operation Recognition,” a state program that awards diplomas to veterans of World War II, the Korean and Vietnam wars. Mr. DeGiovine, who recently passed away, is the grandfather of Tangier Smith third-grade teacher, Elizabeth Schiraldi.