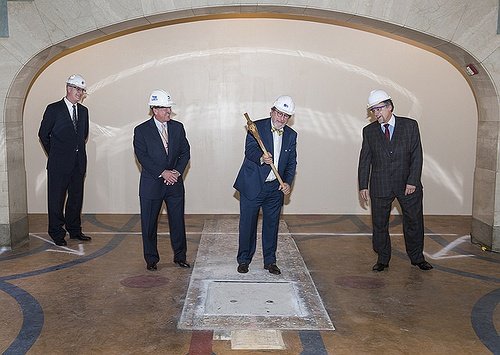 New York, NY - November 10, 2015 - MTA officials began the process of breaking through the floor of Grand Central Terminal today, marking the start of construction on one of several access points that will connect Grand Central Terminal to a huge new concourse for Long Island Rail Road passengers being built below. The concourse being built is part of the East Side Access construction project, which will bring Long Island Rail Road trains into Grand Central.

Dr. Michael Horodniceanu, President of MTA Capital Construction, struck the concrete floor with a pickax, signifying the start of work to remove the section of floor that will be opened up for the new escalators and stairway. He was joined by Joseph Giulietti, President of MTA Metro-North Railroad, which is responsible for the day-to-day maintenance and operations of Grand Central, and Patrick Nowakowski, President of MTA Long Island Rail Road, as well as East Side Access project and construction staff.

The opening now being created is located across from Tracks 112-115, and will contain the structural framework and supports for the future escalators and stairway that will be installed closer to the start of new LIRR service. The work that begins today is projected to take approximately 12 to 18 months.

The space that will house the stairway and escalators is a former seating area on the west side of the Lower Level Dining Concourse that was formally known as the West Pullman Dining and Seating Area. A 1,920-square-foot area has been closed to the public to allow construction to take place. When construction is completed, the size of the closed-off zone will be reduced, and the framed out and supported openings in the floor will be capped over until the escalators and stairs are installed within them.

East Side Access is the largest transportation construction project underway in the United States. In addition to the passenger concourse, platforms, and passageways being built under Grand Central, the project has excavated 42,500 feet of tunnels in Manhattan and Queens, opened up a new entrance to Grand Central at 245 Park Avenue, built a pocket park on 50th Street between Park and Madison Avenues, and is making extensive improvements to the operational efficiency of Harold Interlocking, which will reduce travel time for Amtrak and LIRR passengers.

“This ceremony marks the start of construction of several access points between the existing Grand Central Terminal that you all know so well, and the new concourse below that will provide access to Long Island Rail Road trains for 162,000 daily commuters when it opens for service,” Dr. Michael Horodniceanu said. “Building the largest infrastructure project in the entire country comes with its challenges, and I want to thank Grand Central’s visitors for their patience and support as we work to minimize any disruptions that come from heavy construction work.”

“Metro-North is also proud to be welcoming the Long Island Rail Road into our long-time home, Grand Central,” Joseph Giulietti said. “To make that a reality, Metro-North decommissioned a set of 15 tracks on the west side of the lower level where we used to store trains, and replaced them with a new yard in the Bronx. But that took place behind the scenes. Today is the first time that customers will notice changes taking place at Grand Central.”

“East Side Access represents the largest service increase for the Long Island Rail Road in more than a century,” Patrick Nowakowski said. “The new terminal will double our capacity into Manhattan, and give our customers a direct ride to the East Side for the first time. You can’t have a new terminal without a new entrance to it, so this is a critical and necessary step in the progress of East Side Access. The LIRR also thanks Metro-North and Grand Central’s customers while this work is underway.”

MTA Capital Construction has installed temporary barricade walls, which incorporate noise and dust control, as well as fire protective elements to neutralize impacts of construction on the customer environment. The temporary walls will be clad with information related to the East Side Access work being done there. Metro-North will provide information regarding customer service contacts, an eatery directory and Grand Central tenant advertising. All of the surrounding eateries will remain open for business during construction.

The construction work is being performed as part of a $430 million contract to build the future LIRR Concourse. The contract was awarded in February 2015 to GCT Constructors, JV, a joint venture consisting of Schiavone Construction Co. and John P. Picone, Inc. Under the contract, workers will build the architectural, structural, mechanical and electrical facilities, and escalators and elevators, that will comprise the future 350,000-square-foot LIRR concourse and related ventilation facilities.

The construction that begins today will be the first of several connections to be built between the existing Grand Central and the new LIRR Concourse. Other significant work will take place in the historic Biltmore Room in mid-to-late 2016, where escalators and an elevator will be installed to take passengers directly to and from the LIRR Concourse. Additional work related to this project is underway and will become visible to the public over the coming months and years as the project progresses.

The East Side Access project will increase the LIRR’s capacity into Manhattan, and dramatically shorten travel time for Long Island and eastern Queens commuters traveling to the east side of Manhattan. It is projected to reduce crowding at Penn Station and nearby subway stations and provide easier access from East Midtown to JFK International Airport via the AirTrain at LIRR’s Jamaica station.

The completion of the East Side Access project will also allow Metro-North New Haven Line trains to access to the west side of Manhattan and four stations that will be built in the Bronx.