The 2015 Rockefeller Christmas Tree Lighting: Kicking Off the Holiday Season Brightly in NYC 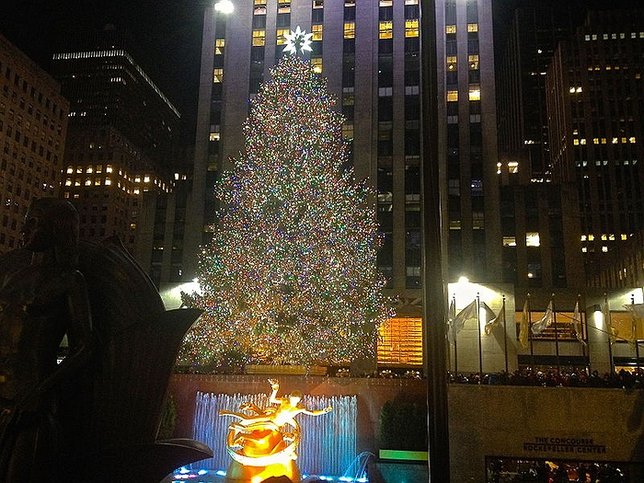 Photo by: Ashoka Jegroo is licensed under CC BY-SA 3.0

There’s no stopping the holiday season spirit from coming alive, especially with the Rockefeller Center Christmas Tree. The iconic holiday symbol draws tens of thousands of people each year to New York City. It’s a tradition that began the year 30 Rockefeller Plaza opened, in 1933.

This year’s 83rd Annual Rockefeller Center Tree lighting ceremony takes place on Wednesday, December 2nd with live performances from 7 p.m. - 9 p.m. at Rockefeller Plaza, between West 48th and West 51st Streets and Fifth and Sixth Avenues. The ceremony is free and open to the public on a first-come, first-served basis. The Rockefeller Tree will remain lit and open to the public to view until 8 p.m. on January 6, 2016. Visiting hours are held daily from 5:30 a.m. to midnight.

This year’s tree was cut from Gardiner, New York (about 80 miles north of New York City) at the property of the Asendorf family. Albert Asendorf was just four years old when his family moved into their new home with the then 6-foot Norway spruce. The family tree grew to 78-feet tall four generations later and weighs 10-tons.

The family said the spruce had outgrown its property, telling TODAY: “It kind of took over the whole yard.” While the tree will be missed, Asendorf’s partner, Nancy Puchalski commented that at least “it’s part of history” now.

Are you planning on heading to NYC to go see the 83rd Annual Rockefeller Center Tree lighting?
If so, send us your pictures & we'll add them to our upcoming Holiday Gallery!