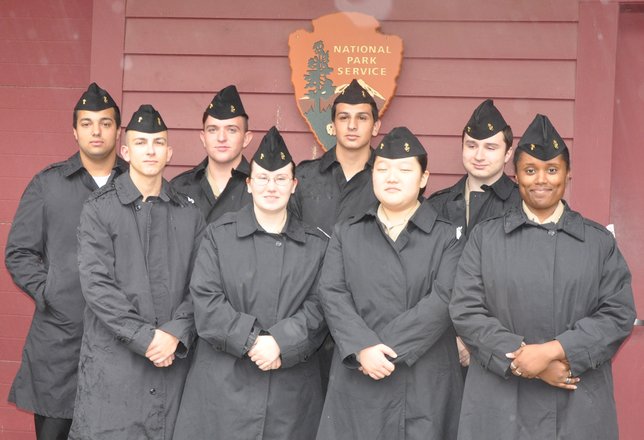 Cadet Ladolcetta is one of four cadets who have enlisted in military service through the Delayed Entry Program and will join the United States Marine Corps after graduation. This past summer he was one of only two cadets selected to attend the “NJROTC Area Four” Leadership Academy & Sail Training at Naval Station Newport, Rhode Island, an honor that is reserved for the best and brightest cadets from the 54 participating schools in the northeastern United States. While there, he completed an intense study program of skills for cadet leaders.

Cadet Kim is interested in pursuing a career with the United States Army and is applying to West Point. She is a member of the National Honor Society and of the Key Club. This past summer she was selected to attend both Empire Girls State, sponsored by the American Legion Auxiliary in Mastic Beach, and the Spirit of America Youth Leadership Conference at Valley Forge, Pennsylvania. She previously participated in martial arts training, earning a red belt, just short of mastering the final techniques required for attaining a black belt.

Several other cadets were selected as department heads and platoon leaders to assist Cadet Leaders Ladolcetta and Kim in their duties. These additional cadet officers will report on various functions such as administrative issues; training and education; supplies and cadet uniform issues. These cadets are Scott Amato, Damian Badzo, Sydney-Rae Giusti, Tyler Baudier, Billy Morrison and Korie Savage.

This Cadet Leadership team hopes to help build upon the successes of the 2014-2015 school year, in which they earned their first ever “Distinguished Unit” commendation for the NJROTC Area 4 based on superior performance and outstanding achievement in academics, competitions, cadet involvement and community service.

The Old Mastic House at the William Floyd Estate is the site of the ancestral home, grounds and cemetery of the family of William Floyd, a Revolutionary War officer, statesman and one of the 56 signers of the Declaration of Independence.