A young pit bull was tossed from a moving truck late at night, and may have previously been used as bait for dog fighting. 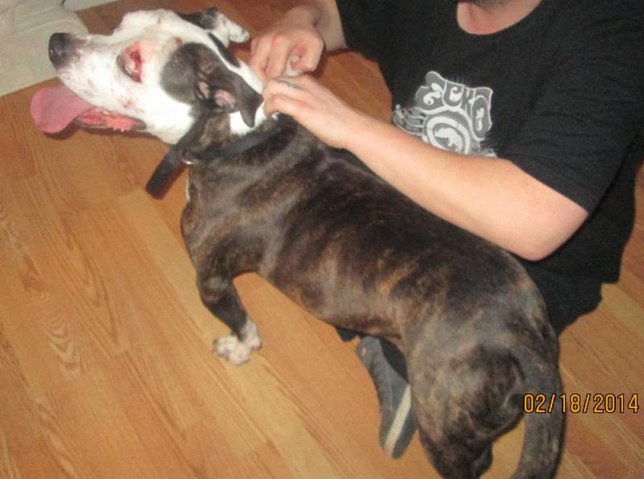 On Wednesday, February 18, a dark colored 4-door pickup truck was witnessed ejecting a young dog from its driver’s side passenger window. The incident occurred around 9 PM near the Post Office in Mastic Beach; after the dog hit the ground it turned around and ran toward the vehicle from which it was thrown.

When the witness stopped to check on the canine it jumped into his vehicle, but appeared stressed and had suffered head trauma. It also bore multiple healed scars on its face which the Suffolk County Society for the Prevention of Cruelty to Animals says are consistent with signs of having been used as a bait-dog for dog fighting.

The dog, a male pit bull mix between the ages of 3 and 4 with brindle and white fur, has been taken to a veterinarian and continues to receive care for severe injuries. It wore a black collar, and is house broken as well.

"This is a blatant act of Animal Cruelty and we will do everything we can to see that those responsible are apprehended," said Chief Roy Gross of the Suffolk SPCA.

The SCSPCA is offering an award of $2,000 for information leading to an arrest and conviction of those responsible for throwing the pit bull from the truck. Anyone with knowledge of the incident or the perpetrators is encouraged to call the SPCA at 631-382-7722.

The incident comes just weeks after another pit bull, now named Miss Harper, was found after being abused and having her ears and hind leg cut off.