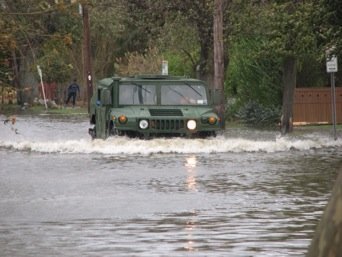 A National Guard Humvee barrels through flood waters to provide assistance to the South Shore during Hurricane Sandy.

West Babylon, NY November 6, 2014 - Governor Andrew M. Cuomo today announced that Suffolk County will receive the first loan from New York State’s Storm Mitigation Loan Program for $13.6 million in wastewater and storm resiliency improvements at the Bergen Point Sewage Treatment Plant in Suffolk County. The loan is made up of a $3.2 million grant and $10.4 million in no-interest financing for Suffolk County, which was approved today by the Environmental Facilities Corporation’s Board of Directors.

“Superstorm Sandy showed us the importance of proactively strengthening our infrastructure so it is more resilient to extreme weather,” Governor Cuomo said. “This loan is the latest in a series of actions taken by New York State to help Long Island strengthen its coastal resiliency against future storms and will enable Suffolk County to improve its wastewater and storm water infrastructure. It is one more way that New York is building back better.

“Governor Cuomo created the Storm Mitigation Loan Program to assist local governments in strengthening long-term resilience for wastewater and drinking water treatment facilities in areas impacted by Hurricane Sandy,” said Matthew J. Driscoll, President and CEO of the Environmental Facilities Corporation. “EFC remains committed to working with our municipal leaders in Suffolk County and throughout New York State to protect public health and the environment while fortifying our water-quality systems to withstand effects from future storms.”

The total cost of the project is $14.5 million dollars, funded by the state’s $13.6 million package, $1.3 million from Suffolk County bonds and $510,000 in municipal contributions. Construction of the project is expected to begin this year.

In the aftermath of Superstorm Sandy, funding for storm mitigation projects in New York and New Jersey was authorized by the federal Disaster Relief Appropriations Act of 2013. Federal funding was allocated based on population sizes of disaster-declared counties. New York received $340 million, or 59.7 percent of the funds, for flood-mitigation projects at wastewater facilities and drinking water plants.

Senator Charles E. Schumer said, “Superstorm Sandy’s devastation taught us that New York must rebuild in a stronger, more resiliesnt way so that we are not as vulnerable to future storms. Upgrading the Bergen Point wastewater treatment plant outfall pumping system will help make Suffolk County stronger by mitigating future flooding as well as protecting the water quality in the Great South Bay. I am pleased that EFC has prioritized and approved a loan for this important project; it is just the type of mitigation project we had in mind when crafting the Sandy Relief Bill.”

Congressman Tim Bishop said, “Upgrading infrastructure is a critical step in minimizing the potential damage from future storms. The more resilient our systems, the more likely they are to remain online or be able to be brought back online quickly. I am glad that Governor Cuomo is continuing to find ways to leverage federal assistance to ensure the completion of such projects.”

Suffolk County Executive Steve Bellone said, “Storm resiliency is vital in protecting our infrastructure from future storms. I thank Governor Cuomo for once again delivering on his commitment to rebuilding and making communities stronger than ever.”