Seventh location for the restaurant that does one thing, and does it well. 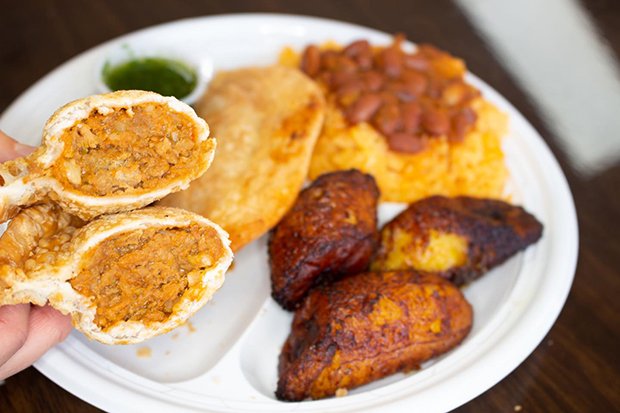 Back in 2011, Roy and Kathy Pelaez set out pon a mission: make the best empanada on Long Island. Long Islanders who both graduated from Sachem High School, their kitchens at Island Empanada now churn out empanadas from seven different locations. The newest location opened recently in Merrick. (With an eighth coming soon in Shirley.)

“Everything’s done with a little Puerto Rican flair to it,” Roy Pelaez told the New York Times back in 2012 from the Lake Ronkonkoma location.

Starting out crafting his empanadas from his home for family and friends Pelaez dreamed of opening the only restaurant specializing in empanadas on Long Island, according to the website.

“A self-taught cook, Roy has trained in both Puerto Rico and the Dominican Republic, where he has mastered the art of empanada making. He also crafts a secret sofrito seasoning that gives the empanadas an authentic ‘taste of the islands.’”

In Merrick, they serve up beef, chicken and pork empanadas in a variety of styles ($3.49). They also have seafood and vegetable empanadas. Except for their side like Yellow Rice and Beans (small $3.99, large $7.99), Sweet Plantains (small $3.99, large $7.99), and Mini Loaded Potato Balls with seasoned mashed potatoes, bacon, cheddar and sour cream and scallions ($5.99), its almost all empanadas on the menu.

On Yelp, Christopher C said it is “surprisingly tough to get a good empanada as far as I've found, for such a relatively simple food.”

“Gave Island empanada a go and it certainly did not disappoint,” he wrote.

Frank T, of Merrick, was excited to see the restaurant open in the area.

“Welcome Island Empanada to Merrick,” he wrote. “Very happy you are here and will be in the regular rotation for me.”