Unseasonably high temperatures – projected to reach 60 degrees or higher on Friday – combined with rain may cause issues in flood-prone areas of Nassau and Suffolk, reports say. 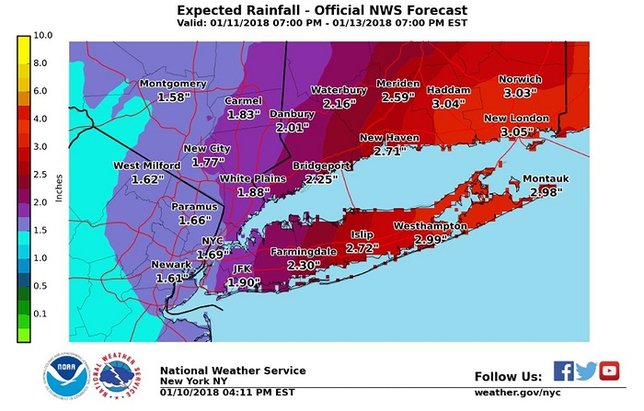 Increased temperatures and excessive rainfall is expected to result in flooding for areas of Long Island, according to reports. Residents are advised to use extreme caution when traveling.

Long Island, NY – January 11, 2018 – The large amount of snow unceremoniously dumped upon the Long Island region with the passing of a major blizzard last week – with some areas receiving accumulations of at least a foot of snow or more – will likely all but disappear over the course of the upcoming weekend due to unseasonably high temperatures and excessive rainfall. However, according to reports, the resulting melting snow could result in potential major flooding in certain areas, particularly in communities situated along the coastline, although flood alerts are in effect for interior areas of Long Island as well.
According to the National Weather Service, temperatures are forecast to increase well into the 50s to around 60 on Friday, and a period of moderate to heavy rain will also move through Long Island Friday into Saturday. Rainfall during this period is expected to reach 1.5 to 2.5 inches, with some areas receiving higher amounts, up to approximately 4 inches.
The combination of melting snow and periods of rain should cause rivers and streams to rise, breaking up the ice, and potentially allowing ice jams to form. Rivers and streams could see sudden rises in vicinity of these ice jams. This is expected to cause localized flooding with water covered roads, especially in low lying and poor drainage areas. Freezing rain, which will transition into snow, is expected through the weekend, causing hazardous driving conditions, especially on untreated surfaces with isolated to scattered power outages possible.
To prepare for flood conditions, towns such as Lindenhurst, Long Beach, Syosset, and Oyster Bay have been preemptively working hard to remove existing snow from key locations, such as intersections and storm drains; Town of Oyster Bay Supervisor Joe Saladino was quoted as saying that he has 17 crews – made up of over 70 workers – out plowing sections of the town that look to be hit hardest by potential floods.
New York Governor Andrew Cuomo has urged New York residents to exercise caution when traveling this weekend due to the various hazards offered by the weather and resultant flood conditions affecting roadways throughout the state.
"This unusual change in temperature can be dangerous this time of year, as ice on roads and in waterways melt, and in order to ensure the safety of residents and travelers, I have directed state resources to be ready in advance for whatever Mother Nature brings our way," Governor Cuomo said. "I am urging all New Yorkers to stay tuned-in to local weather reports and prepare for potential flooding that may result from warm temperatures and freezing rain expected through the weekend."
In addition, Long Islanders are urged to remain off of all frozen bodies of water – such as lakes, ponds – as increased temperatures and excessive rainfall may cause ice surfaces to weaken and become dangerous. In addition, driving conditions after the rain stops are expected to be difficult, as temperatures are expected to drop once again come late Saturday/earlySunday, resulting in flooded streets becoming encrusted with heavy patches of ice.
The complete weather forecast for Friday and Saturday, according to the according to the National Weather Service, is as follows:
Friday’s forecast calls for a 100 percent chance of rain with thunderstorms also possible after 10 a.m. Some of the storms could produce heavy rainfall and areas of fog, resulting in a loss of visibility to some degree; motorists should use caution when driving as a result. Temperatures are expected to hit highs near 60 degrees or higher, with breezy conditions with a south wind 14 to 21 mph, complimented by gusts as high as 31 mph. New rainfall amounts between three quarters and one inch are possible.
The rain is expected to continue into the evening, with the possibility of another thunderstorm; some of the storms could produce heavy rainfall and additional areas of fog before midnight. Lows will be around 40 degrees, with a south wind 10 to 14 mph.
On Saturday, rain and sleet is expected before 3 p.m., with the forecast switching over to a slight chance of freezing rain and sleet between 3 p.m. and 5 p.m., then a slight chance of snow, freezing rain, and sleet after 5 p.m. Temperatures are anticipated falling to around 29 degrees by 5 p.m., with wind chill values between 15 and 25. Winds will be coming from the northwest at 9 to 18 mph, with gusts as high as 28 mph. Chance of precipitation is 80%, but little or no snow or ice accumulation is expected.