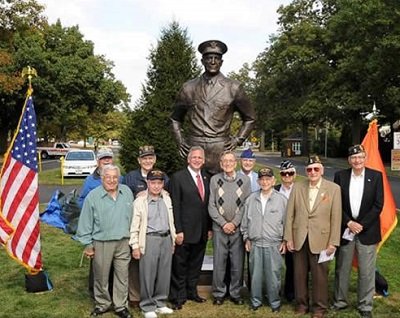 “It gives me great pleasure to rededicate Eisenhower Park with a statue of our 34th President, Dwight D. Eisenhower,” said County Executive Mangano. “The ideals and outlook on the future that Eisenhower projected through all of his actions are as relevant today as they were when he was serving as our President in Washington.”

Dwight D. Eisenhower, a supreme commander of Allied forces in Western Europe during World War II, led the massive invasion of Nazi-occupied Europe that began on D-Day (June 6, 1944). In 1952, while in command of NATO forces in Europe, Eisenhower ran for president against Adlai Stevenson and subsequently served two terms in the White House from 1953 to 1961 as the 34th President of the United States of America. Throughout his presidency, Eisenhower managed Cold War-era tensions with the Soviet Union under the looming threat of nuclear weapons, ended the war in Korea in 1953 and authorized a number of covert anti-communist operations by the CIA around the world. Additionally, at a time when America was enjoying a period of relative prosperity, Eisenhower strengthened Social Security and created the massive new Interstate Highway System.

At 930-acres, Eisenhower Park is one of the largest public spaces in the New York metropolitan area – larger, in fact, than Central Park. This oasis of open space and recreation in the heart of Nassau County offers a full range of athletic and family activities, including one of the finest swimming facilities in the U.S., a major golf facility, dozens of athletic fields and courts, picnic areas, summertime entertainment at Harry Chapin Lakeside Theatre, playgrounds, fitness trails and more. Over the years, beautiful Memorials to the Nation’s veterans, Nassau County Firefighters and County residents who lost their lives in the 9/11 attacks have been added.

Eisenhower Park consists of the former property owned by the exclusive Salisbury Country Club as well as adjoining properties acquired by the county. In the 1920’s, when sports stars became national celebrities, the club drew some of the nation’s top golfers and tournaments, including Walter Hagan, who won the 1926 PGA Championship at Salisbury.

During the Depression, the owners were unable to pay taxes and the property was taken over by the county. Subsequently, the county acquired additional land in the area. In 1944, Nassau County Park at Salisbury was established as part of County Executive J. Russell Sprague’s vision to create a park that “one day will be to Nassau County what Central Park is today to New York City.”