New York Is Open for Hunting: Premiere Locations Abound Across the State as October Hunting Seasons in Full Swing

Excellent opportunities on Long Island open up in November. 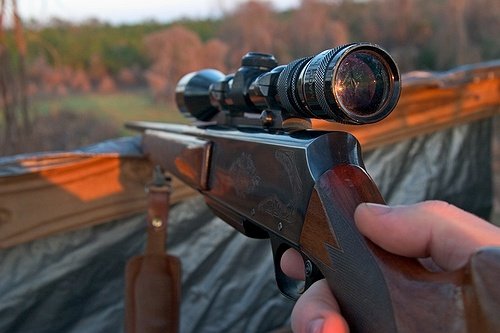 Hunting and trapping are important management tools for several species, including deer, bear, beaver and Canada geese. These activities also provide significant benefits to New York's economy, especially in rural areas. Sales of sporting licenses, hunting equipment and accessories of all kinds, and expenditures for travel to hunting locations provide tens of millions of dollars annually for wildlife conservation programs in New York and contribute significantly to state and local economies. A recent national survey estimated that hunter expenditures on equipment and trip-related expenses in New York totaled more than $1.5 billion in 2011.

"New York has an exciting diversity of hunting and trapping opportunities," Commissioner Martens said. "DEC staff work hard to monitor game populations to identify the most appropriate season dates, boundaries and bag limits for each species. We monitor hunter success to ensure that harvests of all species are sustainable on a long-term basis, and that these resources are available for future generations of New Yorkers to enjoy."

Governor Cuomo's NY Open for Fishing and Hunting Initiative has streamlined sporting licenses and reduced fees to benefit sportsmen and sportswomen throughout the state. Fees were lowered for non-residents to encourage out-of-state hunters to experience the great opportunities in New York. Beginning in fall 2014, the license year runs from September 1 to August 31 to encompass hunting seasons than begin in September. Also new this year, crossbows are allowed for hunting under certain circumstances and setback distances for crossbows and bows have been changed from 500 feet to 250 feet and 150 feet respectively of any home, school building, playground, public structure, farm structure in use, or occupied factory or church.

Hunting opportunity highlights for this year in New York include:

The regular deer season begins October 25 in northern New York, followed by November 15 across the southern tier. The regular season on Long Island is bow only, and began on October 1. The special firearms season for deer on Long Island begins January 5.

New York's third annual Youth Deer Hunt occurred in upstate New York over the Columbus Day weekend (October 11-13). During this hunt, 14 and 15-year old junior hunters were allowed to take a deer of either sex with a firearm when accompanied by a licensed and experienced adult mentor.

Following the completion of the Black Bear Management Plan, bear hunting opportunities have greatly expanded throughout upstate New York. The early bear hunting season in portions of the southern zone ran from September 6-21, and spans September 13 through October 17 in northern New York. The regular season begins October 25 in the Northern Zone and November 15 in the Southern Zone, and runs through December 7 in both regions.

Many people begin their hunting experience with small game, such as squirrels, for which the season opened on September 1, or cottontail rabbits, which opened upstate on October 1; hunting seasons for squirrels and rabbits will open November 1 on Long Island.

Coyote hunting season opened across all of upstate New York on October 1, whereas seasons for other furbearing species (raccoon, fox, bobcat and others) generally open on October 25, when trapping seasons open as well. The areas open for bobcat hunting and trapping were expanded last year, and a special permit is required to take bobcats in those areas. Those interested in participating in the special permit program can contact a local DEC Wildlife office. Visit DEC's website for the Regional office directory.

September Canada goose seasons have come and gone, but waterfowl hunters have plenty of opportunities to look forward to. Duck hunting seasons are set for five different hunting zones, the earliest began October 4 in the Northeastern Zone. Youth Waterfowl Hunts were held in late September for several zones, and junior hunters in western New York had their turn on October 4-5 (Saturday-Sunday only). Canada goose seasons will re-open in most of upstate New York on October 25.

Mentor a New Hunter or Trapper
Adult hunters and trappers are encouraged to pass along their traditions and become a mentor for a junior hunter or trapper. The junior hunter and trapper mentoring program allows 14 and 15-year olds to hunt big game with a firearm and 12 to 15 year olds to hunt big game with a bow while accompanied and supervised by an experienced adult hunter. Unlicensed youth less than 12 years of age may also accompany and assist a licensed and experienced adult trapper. More details about these opportunities are available in this year's Hunting and Trapping Laws and Regulations Guide and on the DEC website.

Since DEC's Sportsman Education Program was first introduced in New York State over sixty years ago, the number of hunting related accidents has declined significantly. The 2013 hunting season had the lowest number of hunting related shooting incidents on record. Down from 24 in 2012, a total of 19 hunting accidents occurred in 2013, and most of these were self-inflicted.

While hunting is safer than ever, accidents happen and it is important to remember that every hunting related shooting incident is preventable. The primary rules of hunter safety can prevent incidents from happening. Be sure to:

Training in the safe handling of firearms and hunting is a legal requirement for anyone hunting in New York. Courses are free to take and are taught by DEC-certified instructors. To locate an available hunter or trapper education class, visits DEC's website.

In support of the NY Open for Fishing and Hunting Initiative, this year's budget includes $6 million in NY Works funding to support creating 50 new land and water access projects to connect hunters, anglers, bird watchers and others who enjoy the outdoors to more than 380,000 acres of existing state and easement lands that have not reached their full potential. These 50 new access projects include building new boat launches, installing new hunting blinds and building new trails and parking areas. In addition, the 2014-15 budget includes $4 million to repair the state's fish hatcheries; and renews and allows expanded use of crossbows for hunting in New York State.

For general information about hunting or trapping in New York, or to get additional information about specific opportunities, visit DEC's hunting or trapping pages. Hunters and trappers should be sure to confirm the exact dates, bag limits, legal implements, and other regulations pertaining to any area that you plan to hunt or trap before going afield.