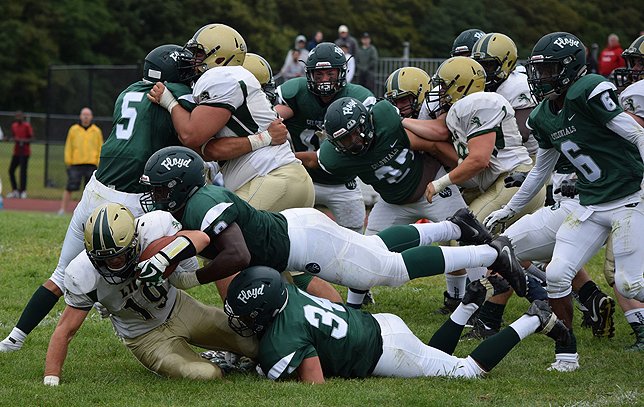 Keith Winfrey #8 and Danny Torres #34 bring down an opponent for a loss of yards.

Mastic Beach, NY - October 13, 2017 - The defending Suffolk County champion William Floyd Colonials varsity football team currently sits atop Suffolk County Division I with a 5-0 record and a News 12 Varsity Tri-State Ranking of No. 21 heading into this weekend’s “Game of the Week” matchup against No. 22 ranked Lindenhurst. The Colonials are looking to avenge last year’s regular season one-point overtime loss to Lindenhurst on the road, the only regular season loss the team suffered last year en route to the Suffolk title.
The Colonials, who are also sporting a No. 5 ranking in the New York State Sportswriters Association football rankings for large schools, have clinched a playoff spot for the 16th consecutive year under the leadership of head coach Paul Longo, who has 10 Suffolk County Division I Championships under his belt along with five Long Island Class I Championships.
The Colonials opened up the season against Longwood with a 23-18 victory in the Parkway Power Bowl, followed by four straight dominant road victories over Sachem North, Connetquot, Ward Melville and Commack, a span of four games which saw them outscore their opponents 144-23 (167-41 for the season).
It has been an all-around team effort with student-athletes contributing on offense, defense and special teams. Leading the way on offense is senior captain and quarterback Robert Taiani with a high completion percentage along with 9 TDs (8 passing) on the season, including a 5 TD performance against Commack last week. Nick Silva is also playing a big part in the rushing game with 8 TDs on the season behind a steady offensive line. The defense, led by Keith Winfrey, Brandon Zack and Nick Silva, has also been stingy. Danny Torres, Mack Driver and Stephen Nagle are also among the many student-athletes who have made big plays.
“This season has really been a total team effort,” said Coach Longo. “Playing four road games in a row is very unusual in high school football and to win all four in convincing fashion in Division I is something special.”
The remaining regular season games are all at home beginning this week against Lindenhurst, then against Sachem East at Homecoming on 10/21 and then they finish out the regular season against Northport.