The William Floyd High School NJROTC visited the US Coast Guard Academy, the US Navy Submarine Force Library and Museum and the USCGC Eagle to learn about our nation's maritime history. 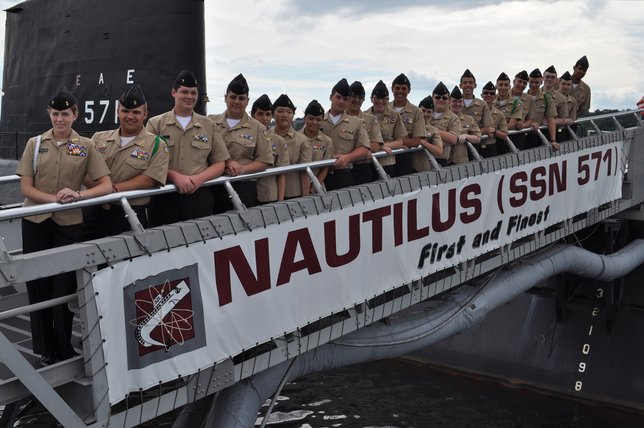 Mastic Beach, NY - December 4th, 2013 - The William Floyd High School Navy Junior Reserve Officers Training Corps (NJROTC) recently traveled to Connecticut for a day of maritime history and education in which they had the opportunity to tour the United States Coast Guard Academy, the U.S. Navy Submarine Force Library and Museum and the USCGC Eagle, a 295-foot ship used as a training cutter and moored in New London, CT, since the end of World War II.

During their daylong excursion which took place on a school holiday, cadets visited the world’s foremost collection of submarine artifacts at the Submarine Library and Museum and learned how the “Silent Service” can trace its origins to David Bushnell’s “Turtle,” which was first used in the Revolutionary War against the British. While at the Submarine Library and Museum, cadets also had the opportunity to tour the USS Nautilus, the world's first operational nuclear-powered submarine, and the first vessel to complete a submerged transit to the North Pole in 1958. The Nautilus shares a name with the submarine in Jules Verne's Twenty Thousand Leagues Under the Sea.

“It was a thrill for our students to visit the Coast Guard Academy and learn about some of our nation’s most important maritime history,” said Commander Jay Tweed, William Floyd NJROTC. “Learning experiences like these will last a lifetime.”

William Floyd NJROTC was chartered by the United States Navy in 1983 and continues to emphasize citizenship and leadership development, as well as our nation’s maritime heritage. Classroom instruction is augmented throughout the year by extra-curricular activities of community service, academic, athletic, drill and orienteering competitions, field meets, flights, visits to naval or other activities, marksmanship sports training, and physical fitness training.

Feature Image: William Floyd NJROTC cadets form up along the accommodation ladder on board USS Nautilus, which was designated a National Historic Landmark by the Secretary of the Interior in 1982.

Also Pictured: Getting a taste of salt air and life at sea, William Floyd NJROTC cadets learn how to maneuver the ship under sail and handle more than 22,000-square feet of sail and five miles of rigging.