Strong winds and rain could bring flooding to Long Island even before Hurricane Joaquin potentially hits. 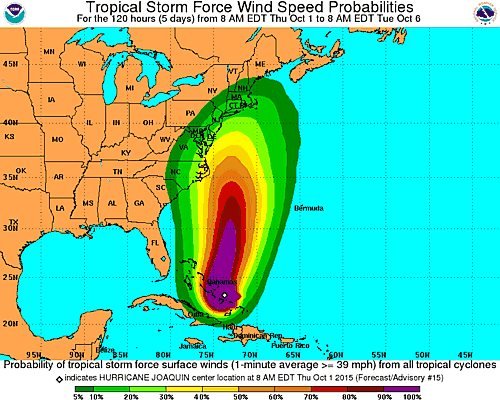 Three years after Superstorm Sandy devastated Long Island and surrounding areas, the Northeast is preparing for another major storm. Recently upgraded to a Category 4, Hurricane Joaquin is currently churning over the Bahamas with sustained wind speeds of about 130 miles per hour. Though it is uncertain where exactly the hurricane will ultimately move, several models project that it could be heading toward the Mid-Atlantic and Northeastern regions of the United States, potentially even striking Long Island directly.

If Joaquin does come to LI it would likely strike around Monday; however, even if the eye of the storm instead moves far out to sea as predicted by the European model the storm will still have an impact on our region. As of 3pm on Thursday, October 1st the NWS has already issued a Coastal Flood Advisory for the region in effect until 6am Friday morning with an additional High Surf Advisory in place specifically for southwestern Long Island during the same time span, after which a Coastal Flood Warning has been put in place through Friday afternoon. Strong winds and rain are likely throughout the weekend, with tropical storm conditions possible as early as Sunday night.

PSEG Long Island has announced that it is preparing for potential power outages resulting from the winds and rain expected from Thursday into Friday. Resources will also be pre-positioned over the weekend so that crews can begin working on restoring power immediately after the storm passes should it hit; additional electrical contractors are also being assembled to assist crews in post-storm cleanup. In order to help minimize damage, PSEG says it has implemented “an aggressive tree trimming program” to identify and clear limbs near vulnerable powerlines.

“After the many lessons learned from Sandy, we have made significant improvements to substations, the electric transmission and distribution system, the outage management system and our customer service technology, as well as our internal communications and emergency planning and execution,” said John O’Connell, VP of transmission and distribution for PSEG LI. “While the track of Joaquin remains uncertain, we are preparing for the worst case scenario.”

To assist in preparation and post-storm cleanup, New York State has amassed a large supply of tools and essentials ready to be deployed to Long Island and the downstate area. This includes 145,000 ready-to-eat meals, 212,000 bottles of water, 200 power generators, 65 light towers, 209 water pumps, and 221,000 sandbags, and 2.5 million gallons of fuel. Additional resources from the upstate region could also be mobilized if need be. New York Army and Air National Guard forces are standing by to deploy if needed to provide emergency services.

Though it is uncertain whether Hurricane Joaquin will hit Long Island directly, flooding and dangerous conditions are possible as early as Thursday night. Caution and preparation are strongly advised, especially for those living in flood-prone areas. To prepare for potential outages, make sure to have plenty of nonperishable food and clean water, charge your cellphones, have blankets and flashlights with fresh batteries on hand, and fill up your cars’ fuel tanks. It is also worth considering having a supply of cash on hand, as a loss of power could impact banks and make it difficult to withdraw funds or use debit and credit cards. Prior to the storm you should also bring in unsecured objects and furniture from outdoors, and discuss an emergency plan with your family.

To get the latest traffic & road conditions before traveling, visit the LongIsland.com Traffic Center, and be sure to check out the live traffic feeds on our Traffic Cams Page.