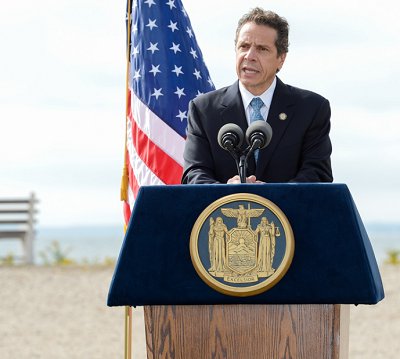 Albany, NY - September 30, 2013 - Governor Andrew M. Cuomo today sent a letter to the U.S. Department of Homeland Security (DHS) and General Services Administration (GSA) calling for both agencies to submit to a consent order requiring them to present a comprehensive environmental cleanup plan for Plum Island in Suffolk County and giving the State final review of the Island’s conditions before it is put up for sale. In April 2010, the New York State Department of Environmental Conservation (DEC) notified the federal government that a number of serious environmental issues had to be addressed before the property could be sold or transferred.

Plum Island is currently owned by the federal government and houses the Plum Island Animal Disease Center (PIADC). The federal government recently issued a Final Environmental Impact Statement and Record of Decision in order to proceed with the public sale of the island despite the fact that it had not addressed the State’s concerns, raising the potential for economic and environmental harm to nearby communities.

“Over the past three years, New York State has raised the issue of potentially serious environmental issues at the federal government’s Animal Disease Center on Plum Island that have not been fully addressed,” Governor Cuomo said. “Before the sale of Plum Island can continue, Washington must step up and sign a legally binding consent order spelling out its full plan for cleaning up the Island and giving the State oversight authority to make sure the work has been done properly. For the safety of Long Islanders, we cannot let this Island be sold without the animal disease center and surrounding area being subjected to a full inspection and cleanup.”

In 2010, DEC identified a number of concerns related to landfills, buildings and other areas on the site and possible contamination of groundwater. Subsequent inspections of the site by DEC personnel revealed that PIADC has failed to both properly manage and dispose of its solid waste and adhere to appropriate quality control and testing procedures for laboratory waste. As a result, DHS recently executed a consent order which addresses a variety of problems associated with how waste has been handled on the site. The Governor’s letter calls on the federal government to conduct a full investigation and address any possible contamination issues prior to the island’s eventual sale in order to protect Long Islanders from potential health, environmental, and economic risks.

The Governor’s letter can be viewed here: http://www.governor.ny.gov/assets/documents/93013PlumIslandLetter.pdf

U.S. Congressman Tim Bishop said, “The environmental concerns with Plum Island identified by New York State significantly limit the potential price the island could command at public auction," said Congressman Tim Bishop. "I will continue working in Congress to eliminate the requirement that the island be sold and welcome Governor Cuomo's leadership in helping to protect the interests of Long Islanders.”

Senator Kenneth LaValle said, “I applaud the governor for making sure that the federal government assumes responsibility for cleaning up Plum Island.”

Suffolk County Executive Steve Bellone said, “I am proud to stand with Governor Cuomo, as he calls on the Department of Homeland Security and the U.S. General Services Administration to help clean up Plum Island and, in particular, address the health issues that were raised by the state more than three years ago. Governor Cuomo has truly been an advocate for Suffolk County and once again he is showing his commitment to the residents of Suffolk County by calling on the appropriate agencies to ensure all health risks will be thoroughly investigated and resolved before the sale of Plum Island proceeds.”

Suffolk County Legislator Al Krupski said, “I want to thank Governor Cuomo for taking the lead on this issue recognizing the environmental sensitivity of the East End. The Federal Government must be held accountable for environmental degradation that has occurred over the years and it is their responsibility to remediate; they should not be allowed to pass the buck.”