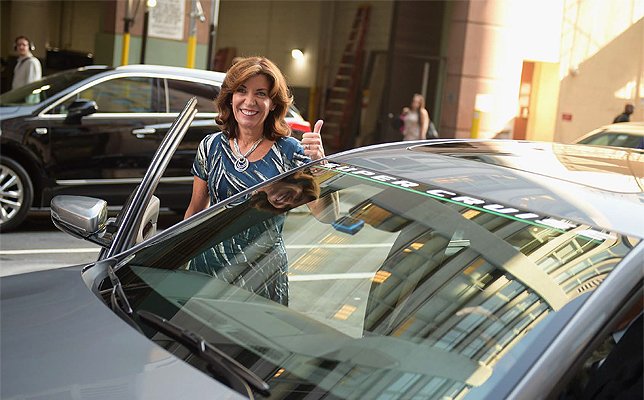 Lieutenant Governor Kathy Hochul in New York City to send off the fleet of vehicles.

Albany, NY - September 26, 2017 - Governor Andrew M. Cuomo today announced Cadillac launched the nation's first cross-country, hands-free drive from its new global headquarters in New York City. The 12 Super Cruise-equipped Cadillac Ct6 vehicles will cross through 16 states and Washington, D.C., as they make their way from New York to California. The vehicles will make stops in major cities across the U.S., including Cleveland, Chicago, Memphis, Dallas, Santa Fe, and Phoenix.
"New York is the nation's hub of cutting-edge technology, and by launching the first-cross country trip using hands-free technology in New York, Cadillac is furthering that spirit of innovation," Governor Cuomo said. "By encouraging businesses to reimagine driving technology in New York, we are spearheading the creation of new, safe travel options for current and future generations of New Yorkers."
Lieutenant Governor Kathy Hochul joined Cadillac President Johan de Nysschen at Cadillac House in New York City today to send off the fleet of vehicles.
Lieutenant Governor Hochul said, "Revolutions in transportation were at the heart of New York's original rise to national prominence and economic prosperity, and this cross-country demonstration continues that tradition. By changing state law to allow automated vehicle testing and partnering with Cadillac to bring its headquarters to New York City, Governor Cuomo has positioned New York State to take the lead in the development of the driverless/hands-free technology that is rapidly transforming the automotive industry."
Cadillac President Johan de Nysschen said, "We are proud to work hand-in-hand with government officials to ensure that our roads are safe for drivers and passengers, as well as to continue to push boundaries and develop new technologies that will define the future of transportation in the U.S. It's especially fitting to kick off this cross-country drive in New York City, the home of Cadillac's new global headquarters, and we're honored to have the support of Governor Andrew Cuomo and Lieutenant Governor Kathy Hochul of New York, both leaders in innovation and cutting-edge technology."
This year, New York began a one-year trial accepting applications from companies interested in testing or demonstrating autonomous vehicles on public roads. Applications for testing may be submitted by manufacturers of "autonomous vehicle technology," or companies creating such technology working in conjunction with manufacturers. All vehicles will also have to comply with federal safety standards and all applicable New York State inspection standards, and a person holding a valid driver license must be present in the driver's seat at all times while it is operated on public highways. Each vehicle to be used must be listed in the application, and a $5 million insurance policy must be in place for any vehicles to be tested.
Companies must also submit a report on demonstrations or tests, undertaken pursuant to a DMV permit, to the Commissioner of Motor Vehicles no later than March 1, 2018. Testing requirements and the application are available here.