The airport, owned by the Town of Islip, is installing new screens and paging systems made by a company that does a lot of research and development on Long Island. 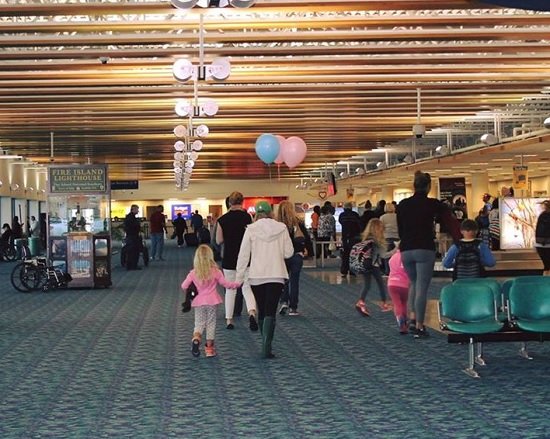 The airport is investing in technology to improve travelers' experience on the ground.

Long Island MacArthur Airport is investing in technology that could further ease travelers’ experience on the ground, including systems developed with the help of a global company’s Long Island research facility.

Long Island MacArthur Airport, owned by the Town of Islip, said it is upgrading its passenger information systems including flight display screens and paging with euipment and software made by SITA, an information technology company that specializes in airports.

SITA,  whose New York office and technology lab are located in Bohemia, less than a mile from the airport, is installing sophisticated screens and paging that modulates volume based on ambient sound.

The new displays are bigger, brighter than those that the airport has been using , and include a new large double-sided video wall with the latest information for passengers as they leave the secure area.  Displays at the ticket counter are also being upgraded.

“Long Island MacArthur Airport continues to invest in services that improve the passenger experience,” Town of Islip Supervisor Angie Carpenter said in a written statement. “Having the latest updates provides our passengers with the information they need to feel relaxed at the airport.”

She said that SITA, which has a large office in Bohemia, is providing systems known as AirportVision and AirportVoice that “will work together so that any flight information updates will automatically be displayed on all screens and announced in real time over the public address system.”

The airport also plans “to roll out updates on our website and to give passengers the choice to receive them via email or SMS,” she said.

Anthony Natale, SITA’s vice president for the Northeast United States said the two systems “will help improve the passenger journey for everyone as they travel here.”

SITA’s Bohemia facility, which has more than 100 employees, is also used as a certification facility where international airlines work closely with the company.

The new SITA systems are slated to be up and running at Long Island MacArthur Airport before the end of the year and in time for the busy holiday season, according to the company and the Town of Islip.

That volume of travelers makes it one of the top 110 airports in the United States, according to the Town of Islip.