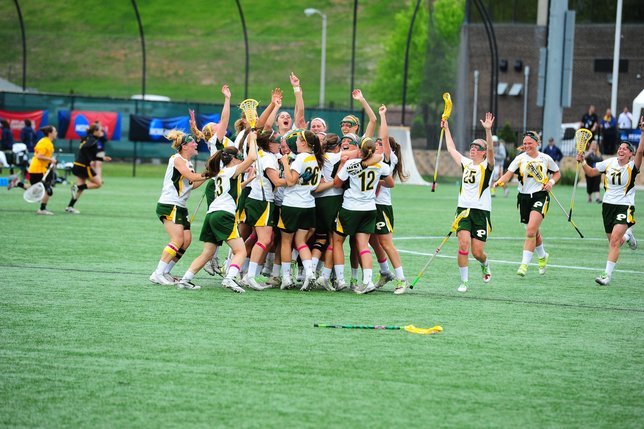 Despite the Panthers' attempt to shut down Sileo with a game long face-guard, Sileo was able to squeak loose with the score tied and a few ticks left on the scoreboard as junior attacker Morgan Chiarenza (Nesconset, N.Y.) found her with a little space right in front of the goal for the game-winner.

Adelphi jumped on the board early with Rachel O'Brien scoring after just 1:01 had passed, but Drost was able to even the score as she started from the top of the circle and weaved in for an unassisted goal from straight away at the 26:29 mark in the first half.  Sileo added her first goal of the game a few moments later as she drained a free position goal with 23:49 remaining.

The Panthers' Danielle Jaycox tied the score at two with 5:47 left to play in the half as she converted on her free position attempt.  With just under four minutes to play until halftime, Drost buried her second goal of the game as Losco added the feed.  The Pioneers held a 3-2 advantage heading into the second half.

The Pioneers did not waste any time in adding to their lead as they came out blazing in the second half with an Olen goal after just 55 seconds had passed.  Olen was initially stopped with her first shot attempt, but not to be deterred, picked up the rebound and drilled a shot past the out of position Panther goalie.  LIU Post scored its third straight goal when Rotan cut in front of the goal and caught a flick pass from Drost in stride and blasted the ball into the right side of the net.

The Panthers would not go down without a fight, firing off four unanswered goals over the next 19 minutes.  Devan Crimi started the rally with an unassisted tally at the 20:19 mark followed by a free position goal by Alexa Froccaro with 19:33 left in the game.  At the 12:49 mark, O'Brien buried her second goal of the game to tie the score at five-all.

After holding the ball for nearly 10 minutes, the Panthers' Sara Sangiorgio was granted a free position attempt that she managed to bounce past senior goalkeeper Dominique Mosca (Merrick, N.Y.) giving the Panthers their first lead since scoring the opening goal of the game.

The tenacious effort by the Pioneer defense caused Adelphi to turn the ball over with 1:45 left to play and LIU Post down a goal.  A mere 20 seconds later (1:25), Rotan fed Pierro in front of the net who then spun back to the goal and fired a shot into the right side of the net tying the game at six.  The Pioneers were able to retain possession as they won the ensuing draw control as sophomore midfielder Kali Maxwell (Colorado Springs, Colo.) scooped up the loose ball and was fouled to secure control.

With just nine seconds left and the score knotted, Sileo had a shot wide left that went out of bounds setting Chiarenza up with the ball behind the net.  Sileo streaked across in front of the goalie with a split-second opening that Chiarenza capitalized on, feeding Sileo who buried the point-blank shot over the goalie's stick.  Chiarenza secured the final draw control as time expired giving LIU Post the 7-6 victory.

Mosca was amazing between the pipes as she tied her season-high save total of 13 on the afternoon.  Her counterparts Jordann Dempsey and Taylor Hayes combined for 10 stops.  Offensively for the Panthers, O'Brien totaled two goals while four others added one apiece.

LIU Post improves to a school-record 19-0 on the season, while Adelphi wraps up with a final record of 18-3.  The Pioneers advance to their second consecutive NCAA Championship in hopes of repeating their success of last year when they dispatched West Chester by a score of 17-16.