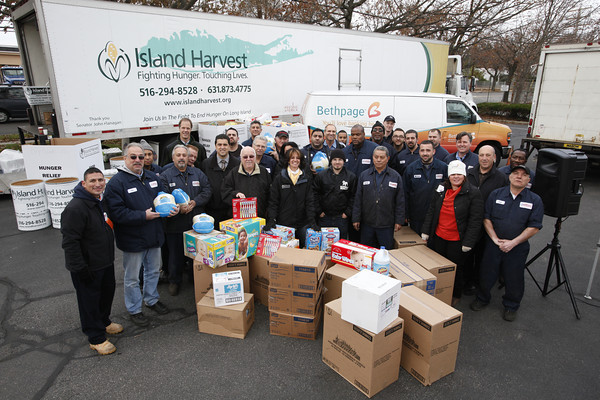 Since 2009, hundreds of Long Island residents, businesses and volunteers have come out to assist in the Bethpage Turkey Drive, which after four years, now has cumulatively collected 20,000 turkeys and 35,000 pounds of food, which are then provided to Long Island’s families in need.  Highlights from this year’s effort include a large donation from Bethpage-based Goya Foods that supplied more than 8,000 pounds of food, and Centereach residents Jennifer and Mike Trombino, who donated 50 frozen turkeys worth $1,400.

“This year’s drive took on increased meaning as exemplified by our supporters and our committed  volunteers, many of whom themselves remain temporarily displaced from the storm, having suffered great damage to their own homes,” said Linda Armyn, Senior Vice President, Corporate Strategy, Bethpage.  “We are thankful to have the means to support our fellow Long Islanders during this time of adversity, and want to thank again all of our partners including Cablevision, the NY Islanders and Connoisseur Media – for continuing to support this vital effort.”

Bethpage Federal Credit Union is a not-for-profit financial cooperative, existing solely to serve its members and has experienced rapid growth in recent years to become a strong alternative to banks.  Bethpage was approved for the largest federal community charter in the U.S. in 2003 and now is Long Island’s largest credit union and leading community financial institution with over 205,000 members, 26 branches and 60 shared service center locations throughout Nassau and Suffolk Counties. As a financial cooperative, Bethpage offers better rates, lower fees and a full menu of personal and commercial financial services.