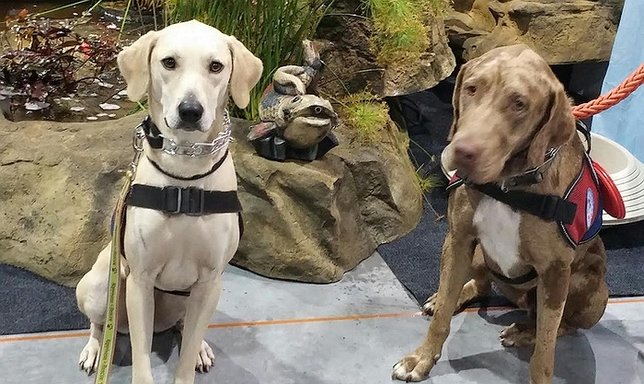 Photo by: Paws of War.

Smithtown, NY - September 19, 2016 - Paws of War, a nonprofit organization that rescues dogs, gives them the necessary training, and then pairs them with veterans in need of service dogs, is pairing two U.S. veterans with working dogs. The introduction between the dogs and their new owners will take place on September 29, 2016 at the Beach Front Grill, located at 2444 S. Ocean Shore Blvd. in Flagler Beach, Florida. The ceremony will take place at 1 p.m., when the veterans will receive the service dogs that have been trained specifically for them, free of charge.

“I’m so excited to once again be a part of this important mission,” explains Lauren Driscoll, dog trainer and program director of the Paws of War Florida chapter. “Our veterans have given so much to us and we know first hand how trained service dogs can help veterans suffering from invisible wounds. Too many of our veterans are struggling as civilians, so we are making it easier for them.”

Both of the dogs that will be given to the veterans were rescued from the Fort Pierce Humane Society in Fort Pierce, Florida and are being placed by the Florida chapter of Paws of War. They were both rescued in February and have undergone extensive training. Service dogs can play an important role in helping veterans to overcome such issues as post-traumatic stress disorder (PTSD), traumatic brain injury, anxiety, and more. Blue Knights Law Enforcement Motor Cycle Club XXII has offered to provide an escort for the veterans to go from the Paws of War location to Beach Front Grill for the hand off.

The veterans who will be receiving the service dogs are Robin Ramos and Derek Logsdon. Robin was stationed in Panama in 1989 and 1990 and suffers from PTSD. Living in Myrtle Beach, the dog he will be paired with is Colby, a lab/catahoula leopard dog mix, which has been trained among other things to retrieve items for him, as well as turn lights on in a room before Robin enters.

Derek lives in Missouri and also suffers from PTSD, as well as suffers from hearing loss in both ears, and has attempted suicide twice. His service dog, Carly, is a lab/greyhound that has been trained to retrieve items for him, as well as assist with his hearing loss, such as waking him up if a smoke alarm goes off. Derek is a former Army sergeant who was deployed to Afghanistan in 2012.

"We are so grateful for our veterans and so happy when we can give back to them,” says Dori Scofield, co-founder of Paws of War. “We have assisted numerous veterans by pairing them up with rescued dogs that have been expertly trained. It’s a win-win situation for everyone.”

Driscoll has successfully trained 19 dogs prior to the two being paired up with the veterans this month. She is the owner of Pet Peeves Dog Training Florida, and volunteers her time for the Paws of War organization. The Florida chapter of Paws of War was launched in May 2015 and is located in Palm Coast. Paws of War is an all volunteer organization that provides assistance to military members and their pets, and provides service and service dogs to veterans suffering from PTSD. To learn more about Paws of War or make a donation to support their efforts, visit their site at: www.pawsofwar.org.

About Paws of War
Based in New York and founded by Guardians of Rescue, Paws of War is a 501c3 organization devoted to helping both animals and veterans. The Paws of War goal is to train and place shelter dogs to serve and provide independence to our United States military veterans that suffer from the emotional effects of war such as PTSD. In turn each veteran can experience the therapeutic and unconditional love only a companion animal can bring. To learn more about Paws of War, visit the site at www.pawsofwar.org.