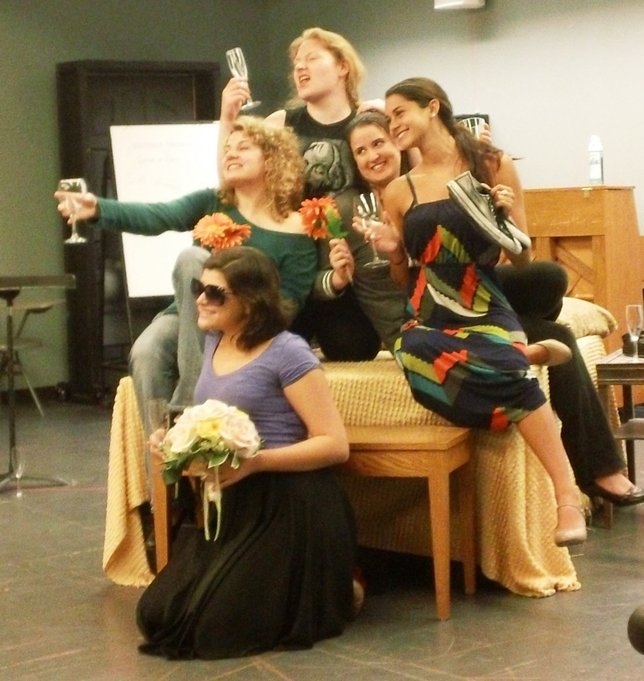 Garden City, NY - September 2014 - Adelphi University students will perform Five Women Wearing the Same Dress in the Black Box Theatre at the Adelphi University Performing Arts Center (AUPAC) from September 30 to October 5, 2014. The play, called “a fresh-as-a-daisy comedy” by the New York Daily News, is the story of five bridesmaids, all from very different backgrounds, united in their avoidance of the ostentatious wedding reception taking place in the house below. It is “an irreverent and funny look at the intricacies of friendship and the power of similar dressing,” a New York Post review said.

This is the first Adelphi production for Erica Lance, a junior and a theatre major. “What I love most about the show is that it’s so relatable,” she says. “It’s so funny and portrays many different personalities and points of view…you will inevitably relate to someone in the show in some way.”

Nicholas Petron, professor and chair of the Department of Theatre, will direct Five Women Wearing the Same Dress. Mr. Petron has worked extensively on stage in acting and directing roles, and has also taken part in various film projects. Five Women Wearing the Same Dress was written by Alan Ball, an award-winning screenwriter who has written for such shows as True Blood and Six Feet Under. Mr. Ball won the 2000 Academy Award for Best Original Screenplay for writing American Beauty.

Adelphi University’s Performing Arts Center is one of Long Island’s premier cultural arts venues for entertainment of all kinds. Tickets for Five Women Wearing the Same Dress are on sale now and are priced at $20 with discounts available to seniors, students and alumni. For more information about all the events at AUPAC and to purchase tickets, visit aupac.adelphi.edu. Information is available at The Lucia and Steven N. Fischer Box Office at (516) 877-4000 or boxoffice@adelphi.edu. Regular box office hours are Tuesday through Friday, from 1:00 to 6:00 p.m. The box office is also open two hours before most scheduled performances.

About Adelphi University: Adelphi is a world-class, modern university with excellent and highly relevant programs where students prepare for lives of active citizenship and professional careers. Through its schools and programs—College of Arts and Sciences, Derner Institute of Advanced Psychological Studies, Honors College, Robert B. Willumstad School of Business, Ruth S. Ammon School of Education, University College, College of Nursing and Public Health and the School of Social Work—the coeducational university offers undergraduate and graduate degrees as well as professional and educational programs for adults. Adelphi University currently enrolls nearly 8,000 students from 43 states and 45 foreign countries. With its main campus in Garden City and its centers in Manhattan, Suffolk County, and Poughkeepsie, the University, chartered in 1896, maintains a commitment to liberal studies, in tandem with rigorous professional preparation and active citizenship.