Fans can help commemorate the late Marchello by supporting a collection of his works and intimate photos, funded through a Kickstarter campaign. 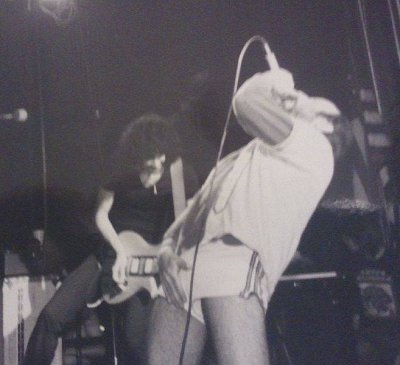 Fans of local legends, The Good Rats, were devastated to learn of the death of the band’s lead singer earlier this summer. Peppi Marchello was to many, both on Long Island and across the nation, the magnificent voice behind one of Rock n’ Roll’s most underappreciated bands of all times, and a voice that will be sorely missed. Once dubbed “the world's most famous unknown band” by Rolling Stone Magazine, the Good Rats played at major venues across the globe—including Madison Square Garden, the Philadelphia Spectrum, and England’s Hammersmith Odeon—and alongside such acts as The Ramones, Aerosmith, Ozzy Osbourne, Kiss, and Bruce Springsteen.

Sadly, Peppi’s voice will never again grace the stage, but his spirit will live on through his family and fans, and the fruit of his labors will be preserved by the band’s recorded works as well as a new collection of his lyrics. The book, titled “Peppi Marchello: Song Writer,” is being constructed by Marchello’s publicist and longtime friend, Clifford Meth; it will contain all of Peppi’s cherished lyrics, never-before seen lyrics for songs Marchello was working on before his untimely passing, and intimate photos assembled from his family’s archives. Proceeds from the book’s sales will go to benefit Peppi’s widow, Cathy Marchello.

“Peppi wrote dozens of songs in the years before he passed away. This book will include not only his collected lyrics from all of his LPs but also many songs that were never seen by his fans,” said Meth. “And the photos are sensational—beautiful photographs from Peppi’s family archives of intimate moments and stage antics. It really tells the story of the man that legions of fans regard as Long Island’s most important singer/songwriter.”

In order to fund the publication, Meth has created a Kickstarter campaign which allows fans to not only help the project come to fruition by in essence pre-ordering the book, but also gain extra benefits for contributing to its success. Various rewards are available depending on how much individual backers are able to provide, and many levels include a copy of “Conflicts of Disinterest,” a collection of fictional works by Cliff Meth featuring an introduction written by Peppy titled “A Tale of Two Balls.” The book is signed by both authors.

Additional benefits include an advanced copy of the limited numbered first edition of the book, recognition as a sponsor within its pages, and the opportunity to be a part of the book itself. Backers who pledge enough can send in a picture of themselves with Peppi to be printed in “Peppi Marchello: Song Writer,” or write a passage about their personal experiences with Marchello and The Good Rats to be published in the book.

“Peppi had a special relationship with his fans,” said Meth. “We related to his songs. Collected, they tell the story of an uncompromising artist with a bold sense of humor, a keen self-awareness, and a passion for his music that was truly inspiring.”

For the truly die-hard, there is even an option to book The Good Rats for a private two-hour show featuring Peppi’s son, Stefan.

In light of these great perks backers have, perhaps unsurprisingly, already pledged enough to get the book published and reached the $10,000 stretch goal that will allow Aardwolf Publishing to add to it an extra 30 pages. That “Peppi Marchello: Song Writer,” is certain to reach the presses does not, however, necessarily mean fans should wait for its intended March 2014 release date to buy a copy. In reserving a book ahead of time, fans will be able to help increase the quality of the collection by funding added benefits including higher quality paper, more inserts, and potential giveaways such as posters for early backers of the project.

“The exciting thing about a Kickstarter is people are investing in a project’s future,” Meth said. “They are making it happen—but they are also the biggest beneficiaries because they not only get an early, hand-numbered copy of the book, but also lots of free things.”

Fans who would like to help build the quality of the commemorative publication, or simply reserve their copy ahead of time, can do so by visiting its page on Kickstarter and selecting the amount they would like to contribute. The campaign ends on October 9th, after which time fans will be unable to obtain all the extra perks that come from pledging, but will still be able to buy the book when it is released.