Long Island Resident Excels On and Off the Fields 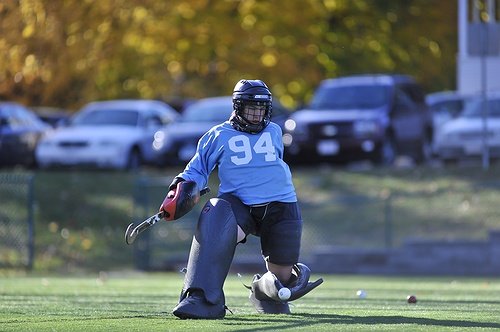 Holtsville, NY - September 14, 2015 - As a whole, student athletes at Division III colleges and universities spend more time on academic activities than they do on athletic ones. The reverse is true for athletes at Division I and II schools, according to a recent study released by Inside Higher Education.

Division III colleges and universities, whose member institutions do not offer athletic scholarships, rely on their student athletes to participate in athletics for the pure love of the sport.

Samantha Alvino of Holtsville, NY, a senior at Elms College in Chicopee, MA, is a shining example of this.

Known as Sam among her friends, this two sport student athlete excels both on the field and in the classroom where she maintains a perfect 4.0 GPA. To further expend her considerable energy, she serves as secretary of the Student Athlete Advisory Committee and is the Vice President of the Future Teachers' Club.

She also tutors in the ARC for Early Childhood Education and Sociology and was a member of the sophomore class Leadership Program. She somehow manages to do all this while playing field hockey in the fall and softball in the spring.

It’s all in a day’s work for Sam, whose affable personality and pleasant smile make her a popular athlete among her teammates, not to mention the fact that this girl can play.

Sam’s accomplishments on the athletics fields are nothing short of spectacular. As a catcher and outfielder for softball and goalie in hockey, she has been named to the Academic All Conference Team in both sports on more than one occasion, received Honorable Mention All-NECC (New England Collegiate Conference) for field hockey, and was named NECC Player of the Week for field hockey three times.

Other honors that came her way include being a member of the 360 Club and receiving recognition as a Division III Scholar of Distinction.

She was a member of the 2014 NECC Championship All-Tournament Team, and played an important role as part of the Elms College’s softball team which captured the 2015 NECC title.

If that’s not enough, she spends a considerable amount of time volunteering for such noteworthy causes at Rays of Hope, Rebuilding Springfield, Special Olympics and Blankets for Soldiers.

One has to wonder, how does she do it all?

“Being a part of an athletic program helps me better manage my time and stay focused on my school work,” she explains. “I feel that I am better organized when I am in season. Playing two sports and having school work to complete keeps me busy and I actually enjoy being busy. Sports and education are a huge part of my life and without them I wouldn't be the same person I am today.”

She adds, “I've always had an interest in learning and since I was younger I never wanted to leave school. I also designate Sundays as my homework days because we usually don't have practice and I can catch up on my school work. Long bus rides for games are also a great time to catch up on some work.”

Jenn Ouellette, Field Hockey Coach at Elms College, says, "Sam is a really dedicated student-athlete. She wants that 4.0, she works hard to achieve it, and then she brings that same work ethic into her Field Hockey and Softball as well. Being a dual-sport athlete, Sam has great time management skills, she knows what she needs to study and get done, and then brings that focus and dedication to the field."

With a double major in Early Childhood Education and Sociology, Sam has plans to earn her Master’s Degree directly after graduating from Elms College. “I also hope to have a classroom of my own one day where I can teach children the foundations they need in life,” she says. “Teaching has always been my passion and I want to inspire children just as much as my teachers have inspired me.”