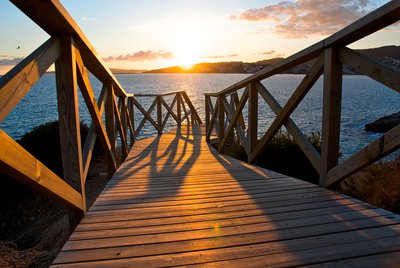 Over three thousand people converged in Long Beach on Saturday morning to bid farewell as demolition began on the iconic boardwalk.  Damage caused by Hurricane Sandy left the boardwalk unsafe, prompting the demolition.

While the 2.2 mile long boardwalk will certainly be missed by Long Beach residents, City Councilman Scott Mandel says a new, stronger boardwalk will be built in its place. Mandel said that the boardwalk was “the heart and soul of Long Beach.”

Demolition is expected to take about a month, and officials are hoping to get a new boardwalk built by summer. The total cost of the demolition will be about $1.5 million, while construction on a new boardwalk will cost about $25 million.

The boardwalk was first built over 100 years ago in 1908 by William Reynolds. For those that grew up in Long Beach, the demolition of the landmark was especially painful. The benches that lined the boardwalk and included memorial plaques have been removed and will be kept until construction on the new boardwalk is complete.

Sandy was responsible for the damage or destruction of 305,000 housing units along with 265,000 businesses. The demolition of the Long Beach boardwalk is just one of many projects and landmarks being scrapped as a result of the storm. Recently, construction on “Trump on the Ocean” – Donald Trump’s Jones Beach project that would have included restaurants and catering facilities – was cancelled as well. Jones Beach also remains closed due to damage.

The annual Long Beach Polar Bear Splash, which normally takes place near the boardwalk on Super Bowl Sunday, will be relocated.