UPDATE: Police Officers Help Deliver a Baby Girl in the Back of an Ambulance

Nassau County Police report the details of an Aided Case involving the birth of a baby girl on Monday, September 12, 2016 at 1:30 pm. 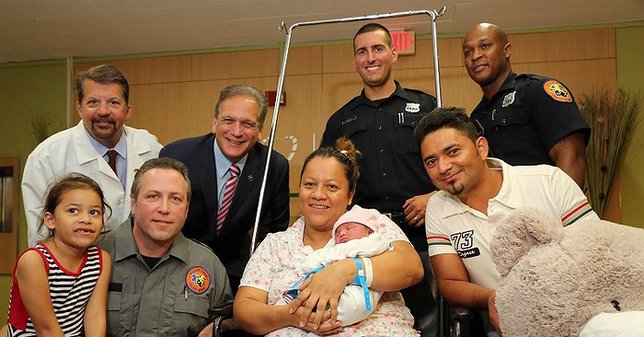 Update - September 13, 2016 - Baby Ailish Padilla was delivered by NCPD medic and police officers in an ambulance on the way to the Nassau University Medical Center. Mother Kenia Borjas Arias and Dad, Ronnie Padilla, are all doing well and are grateful for the quick action of the officers and physicians. They were met in the ambulance bay parking lot at NUMC by OB/GYN chief resident Angela Szee, MD, who then took over and mother and baby were then admitted.

“They are my heroes,” said Ms. Borjas Arias when she saw the officers in her room at NUMC. She was personally congratulated by County Executive Mangano who brought a huge teddy bear as a gift to welcome the newborn baby. The entire family thanked the officers and the NUMC staff for all their efforts in helping deliver a healthy baby.

According to police, First Precinct Police Officers responded to a Henry Street residence for a call of a pregnant 32 year old woman unable to walk and in pain. Upon arrival the First Precinct Police officers assisted Nassau County Police Medic Matthews with transporting the woman into the ambulance. Once inside, Police Medic Matthews determined the woman’s water had broken. The baby’s head was being presented with the umbilical cord wrapped around the baby’s neck causing the baby to turn blue. Police Medic Matthews was able to remove the umbilical cord and complete the delivery of a healthy baby girl in the back of the ambulance. With the assistance of the First Precinct police the baby was transported to a local area hospital. The mother and baby are doing fine.